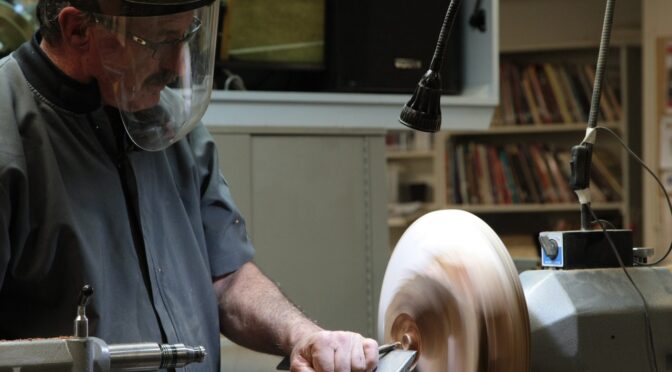 Terry opened by showing some, mainly burl, pieces he had turned with multiple adjoining bowls highlighting the fact that the intersecting edges must be crisp. He also showed some pieces that visiting turners from overseas had demonstrated, from his collection.

He then showed us his large faceplate he uses for large pieces. He has a lathe with a much bigger swing than the DVR’s. We were then shown on a smaller scale how he balanced a piece on the lathe using large lead weights screwed to the face plate to which the slide (carrier) disk was attached.

Tip: If using an MDF faceplate the screw holes may raise the surface which must be sanded smooth before moving the piece and re-screwing.

To centre the burl on the lathe with the face vertical he used a faceplate attached to a reverse adapter in the tailstock to hold the burl while gluing it with wedges to the slide.

The lead weights are screwed on with initially 1 screw as the weight can be adjusted for balance by turning it. Add or take off more weight until the face plate remains stationery. When turning bring up the tailstock for safety and with the handle right down on the hip flatten the face. Final flattening can be done using a large skew or a heavy negative rake scraper. After it is flat sand, so the edges of the bowls remain crisp.

We can then mark out the multiple bowls with a compass, an odd number tend to look best overlapping as you see fit. The slide can be recentred on the bowl to be turned and rebalanced. When turning overlapping bowls keep the flute well closed as there is a lot of hit and miss and the edges could be damaged. Sand and finish, with Danish or hard burnishing oil, each bowl before moving on to the next.

Important Tip: Discard all rags and paper towels that have been used to apply oil into a metal bucket of water or preferably outside as they can spontaneously combust and are a fire hazard.

Thank you, Terry, for another well put together demo with much information to absorb.