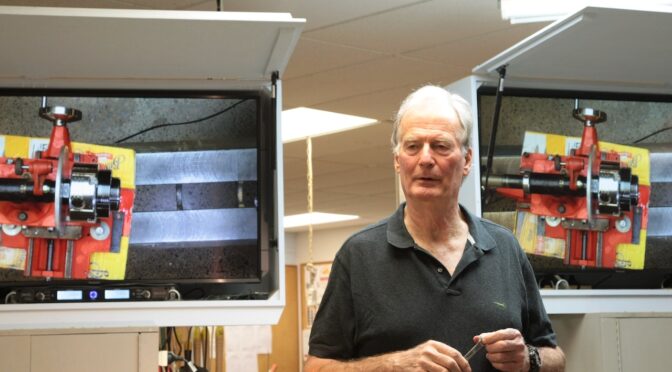 John is a long-time member of a small group of club members interested in Ornamental Turning but is the sole remaining one due to people passing on or moving away.

John started by defining Ornamental turning as the merging of creative woodturning and precision engineering. It is a process of sophisticated decoration of one’s work.

This endeavor is not for everyone. It tends to appeal to engineers or those interested in the technical side of turning. Typically, equipment is hard to find and more often than not, Ornamental Turners will make their own. It is expensive to buy or have made.

This craft has its origins with mechanically minded royalty and aristocracy (due to high cost) since the 15th century. It saw a decline in the 1920s due to a greater attraction for engineers – Cars.
A classic name is HOLTZAPFFEL, who made lathes and Rose Engines. There are known to be several in NZ.

Today there is a big following in USA and Europe.

John referenced the geometric nature of the author’s recent demonstration of the construction of Singapore Balls in reference to the fact that Ornamental turning has its roots in geometry and the interplay and interaction of various geometric patterns.

John talked of the interest in ornamental turning in the past. The group met monthly and had support from NAW and various experts from around the country – for example the late Bob Lin and his Ashburton Wood Turning Museum and book. John expressed interest in forming a new group and asked for those interested to meet up afterwards. 4-5 people gathered around the Rose Engine in the corner of the club afterward and all seemed to have some interest.

Plenty of samples were passed around the room. The wood suggested was dense and tight grained, for example Camellia, Rata, Black Maire and Matai and Camelia was shown.

As samples of work were passed around, John began to explain how various patterns are made.
Even with rudimentary geometric patterns as a base, one can build up additional patterns by hand to get a good effect.

Fly cutter in head stock – a high speed fly cutter that is safely mounted in the headstock can be rotated at high speed. By holding the work in a stationary position, patterns can be cut on different axes and by rotating/repositioning the work, an interplay of circular patterns can be easily produced.

Router in tool post – This method allows the cutter to be placed on even more planes and by using the indexing built into the headstock, patterns can be cut in regular intervals. John gave the example of symmetrical slices that could be cut into a bowl.

Ornamental Wood Burner – John demonstrated a homemade wood burner set up. The burner itself was adapted from a computer power supply. The burner was mounted on a strengthened articulating computer monitor arm, allowing it to be positioned and any point and angle in space. The work is then held in a rotating carving mount with an indexing wheel. With the heat adjusted to suit the wood, ornamental pyrography is possible.

Teknatool Ornamental Turner Jig – 500 of these machines were made. They consist of a 2-axis vice and a chuck on a spindle. The vice is high precision with very little backlash to allow accurate adjustment. The work is held in the vice and a cutter is mounted in the head stock. The work can be easily advanced or rotated by the spindle, again allowing interlacing circular patterns.

Rose Engine – a rose engine has a spring loaded, moveable head stock that is guided by Rosettes. These are geometric shapes (curves and bumps) that are traced by a follower that moves the headstock in 2 axes. A fly cutter can then be used to cut patterns in the material. The head can be adjusted on an indexing plate to interlace the patterns. There are endless permutations.