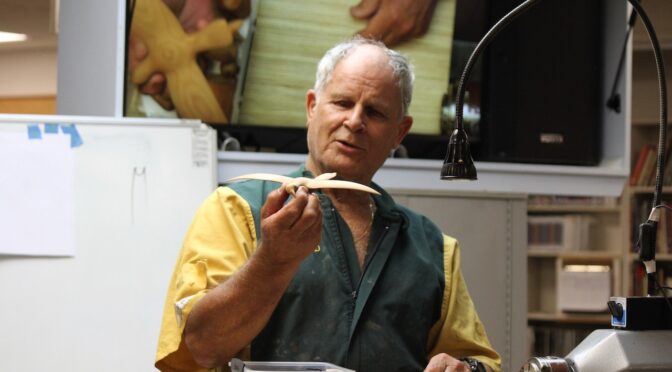 After a break due to Covid and eye surgery, Bruce was back with his long awaited demo. This time it was Danish Birds, based on Danish designer Kristian Vedel 1959 design.

After showing us some interesting wooden birds that he wasn’t going to make (perhaps another demo?), Bruce got started with the Danish bird.

The first part was creating the unique eyes, composed of a dark wood for the iris and a lighter wood for the white of the eye.

A small length of Purple heart was used for the dark iris. Bruce had taken it upon himself to cook the Purple heart in the oven to give it a dark, intense shade of purple. Mounting it between centers, he quickly turned it down to a 12 mm dowel.

A lighter block of wood for the white of the eye was then mounted in a small chuck. With a drill mounted in the tail stock in a Jacobs chuck, Bruce drilled all the way through the block with a 12 mm drill.

The Purple heart dowel was then glued inside block. Once set, the block was mounted between centers. Here, the key is to remount the block slightly off-centre, so the dark iris is off to one side. This was then turned down to a 12mm dowel and with that, the eye was now complete.

To make the head, Bruce took another small block, drilling 12mm holes on either side. Small lengths of the eye dowels can be glued into these holes, creating eyes on either side of the head.

When gluing, take care to orient the eyeballs the right way (towards the beak!).

Once these have been glued in and set, the block is mounted between centres. Mark the head in the middle and start rounding. On one side of the head, the long beak is shaped, and on the other a small chuck bite is cut. For the final shaping of the beak, the head is remounted in a small chuck. Once the head and beak have been cut to their final shape and sanded, the head can now be parted off.
To get a nice rounded head, Bruce used a piece of steel pipe with the inside edges sharpened to hone it perfectly round.

For the base, another small block was mounted between centres. A 35mm chuck bite was cut into one end. Once remounted in a chuck, the body can be shaped to your preference, but the upper end must be kept to a 25mm diameter. A hollow is cut at the top, to sit the round head comfortably.

To remove the chuck bite, Bruce had an ingenious way to mount it between centres. A live centre with a cup end was used in the tail stock, with a golf ball used in place of the head.

With a multitude of onerous golf puns rapidly cascading from the audience, Bruce finished another ingenious, live wire demo. Thanks Bruce!

Check out the Project Sheet