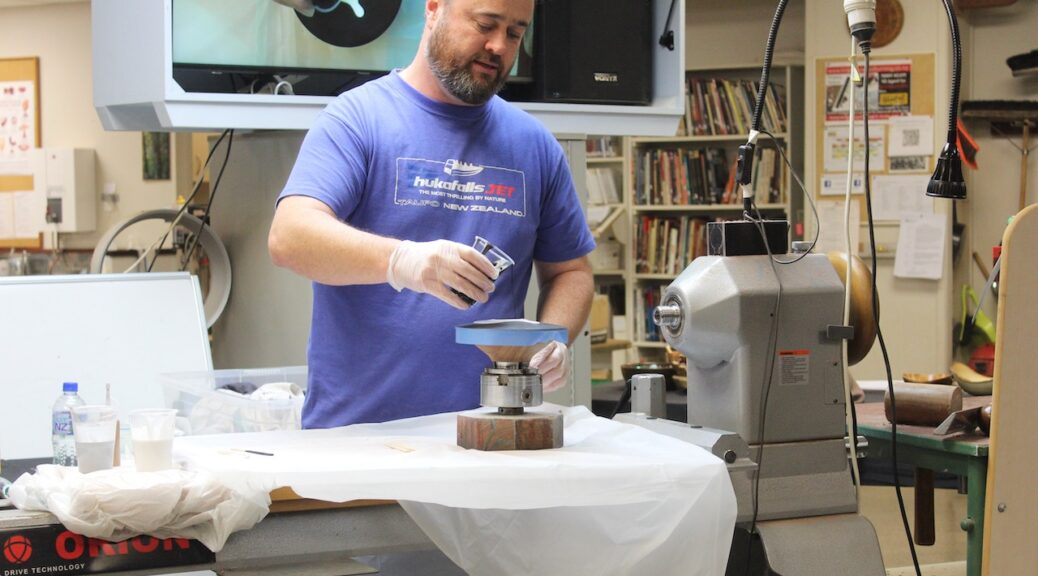 Shannon is from the Franklin Woodturner’s Club and was well supported by members from his Club, not that he needed them, as he gave us an entertaining and informative presentation without using the lathe.

Using a process, similar to marbling, Shannon took us through the steps to decorate the wide rim or underside of bowls. He then demonstrated the process on a flat piece of MDF that produced a placemat. The bowls were finished on the surface not to be treated and the bowl with the underside surface to be treated was still in the chuck with the inside not turned.

The items decorated had been preturned with no sanding sealer, sanded to 240grit, paint will not adhere to a smoother surface, and painted with matt black primer.

The process is based on Acrylic paint and two other ingredients. You can use the cheaper Floetrol(Flood) Acrylic and Stain Conditioner from Mitre 10 or Bunnings or the more expensive option Gordon Harris Golden GAC800 Low Crazing Extender for pouring Acrylics. The former gives a painted appearance whereas the latter gives a resin appearance.

The surface to be painted is masked with masking tape to minimise paint going on the wrong surface. The tape also forms a dam on the down side of the curved surface.

Shannon believes a better result is achieved by working in a monochrome colour scheme, that is similar colours. He used Black, Grey and white. The paint is prepared by pouring the base, Floetral or Golden GAC800, into disposable cups, approximately 250ml but unused paint can be stored in air tight containers, and he wore gloves. Next the colour is added and the amount is dependent on what acrylic paint is used, poster paint requires more as it’s thicker. The paint mix is stirred using ice block sticks and when even blend is achieved a drop, or two, of CRC Onedrop, a clear synthetic oil, was added and again stirred into the mix.

The mixed paint was gently poured on to the surface starting from the highest point starting with the darker colour. The item being painted was carefully turned and another pour made, not unlike droplets of water running down a window, until the desired area is covered. The process is repeated with the next colour and repeated with the third. The colours where then blended together, where desired, using a flat blade knife such a a butter knife, as Mum first.

The finished product is left to dry, this can be a few days, and the masking tape is removed and the bowl is returned to the lathe for finishing.

The piece of MDF was painted in a similar manner but if brave enough you can place the wood on the surface of the disposable cup and invert allowing the paint to flow over the surface. Repeated with the following colour. Instead of or additional to using the knife to spread the colours you can use the edge of a torn paper towel or touch the paint with flame from a blow torch. Hot air from a hot air gun or hair dryer blows the paint and the results are messy.

A great demonstration and the outcomes were great. Another tool for the decoration/enchantment box.