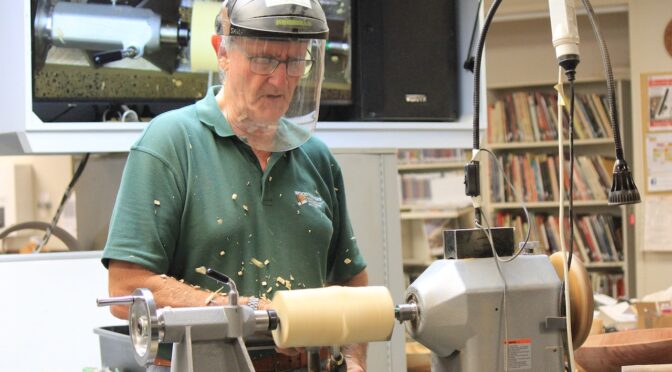 Strett demo tonight was a unique take on the old classic spinning top – the “Humming Top”. Essentially a large spinning top/box, hollow inside, with a hole cut into the side, which hums when spun.

To get started on the box, Strett took a rectangular block of wood, marked the middle on both ends, and mounted it between centers.

He quickly rounded it off, and had a practice with the skew to give it a smooth finish.

Using a parting tool, 48mm spigots were cut at both ends.

The cylinder was removed and mounted in a 50mm chuck.

In the tail stock, a Jacobs chuck was used to hold a 10mm drill. The speed was lowered and a hole drilled to about 100mm down the cylinder. The hole will later fit a thin spindle, which will travel down the inside of the box, helping it spin.

After drilling, the Jacobs chuck was removed and a live center inserted into the tail stock, which was brought up for support.

A thin lid (5mm or so) was marked at the top of the cylinder. The depth of the drill was also marked, then 10mm or so below that, the bottom of the box was marked. (You don’t want the drill hole to go right through the bottom).

A parting tool was used to create a small recess where the lid would be parted off. The lid was parted off with a thin parting tool, leaving a small inside edge so the lid will fit back on snugly.

Before parting all the way, a saw was used to safely remove the thin lid.

With the lid removed, the inside was hollowed out with a bowl gouge and tidied with a skew chisel. The skew was used to get thin, even side walls and a flat bottom to the box. Leave a small hole however (5-10mm) on the inside bottom. This is where the spindle will fit in.

With the vessel hollowed, the lid was glued back on. A long spindle, 10mm wide was fitted through the lid and glued to the lid and into the hole at the bottom.

Strett removed the box, turned it around and remounted it, using the spigot on top of the lid to remount it. Tail stock brought up for support.

The waste timber was parted off, and the bottom reshaped to a V, upon which it will spin. With more time, Strett suggested drilling a hole into the bottom to mount a harder material upon which the top will spin on, for more durability.

While still mounted, a vertical slot was cut into the side of the box with a dremel. This will let air pass through, giving the humming sound as it spins.

A quick demo of this ingenious little toy was given. And with that, another excellent demo from Strett was done.

Some Research by Dick Veitch has come up with the following additional information, humming tops is clearly a topic that is generating some discussion and thought.

“A straw can be used to test each hole drilled, like blowing across the top of a bottle.”
He has also included a link which some might find interesting
https://en.wikipedia.org/wiki/Helmholtz_resonance