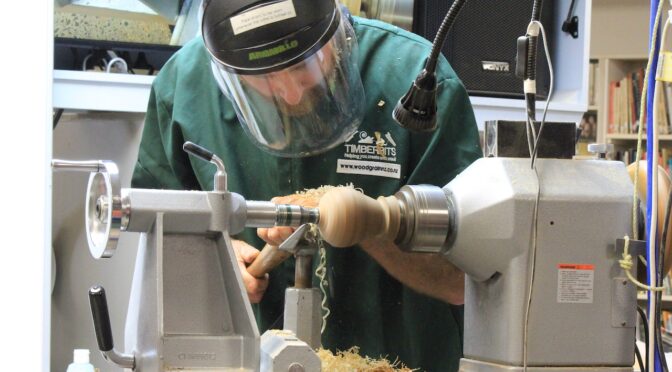 As a background to the demo, Dave explained that he had been working with hollow forms for some years and was initially motivated by David Ellsworth’s book “Ellsworth on Woodturning”. Dave was interested in wet and finished hollowing, without twice turning. However his early experiments resulted in warped forms which were he thought were ugly. What he wanted was for the inevitable warping to complement the form of the piece, and to be able to consistently predict its final form before commencing turning.

Understanding how wood moves is pivotal to achieving consistent results. In this diagram, the template of a hollow form is superimposed over a cross section of the log, with the centre line running through the pith. The pith remains in the turning. The foot of the vessel is located where the growth rings are tightest, and the opening at the opposing end where the growth rings are furthest apart.

The second diagram illustrates the location for turning a smaller hollow form where the pith is not included in the turning. As before, the centre line runs through the pith, but the opening of the vessel is oriented towards the pith, which is cut away during turning.

With the blank in a chuck, and the tailstock up, Dave began his practical demonstration by shaping the outside of his hollow form. The shape was teardrop, with a narrow top. He retained a section of wood at the foot near the spigot which he referred to as “the stabilizing part”, to give support while hollowing. He used a gouge sharpened to a 40/40 Irish (or Ellsworth) grind. This versatile tool has swept back wings which can be used for scraping to remove any ridges which may remain after cutting. Turning the speed down, Dave wet sanded with 120 through 320 grit. He used a squeeze bottle to direct water on to the piece, the water contained a little detergent to act as a lubricant. Dave advised that he usually uses a bow sander, which shapes to the contours of the piece. Without the bow sander, his tip was to offset the sandpaper to the rotation of the piece in order to avoid scratching concentric circles.

With the outside shape completed and sanded, Dave began hollowing. For the demo he drilled an 80mm hole with a standard drill bit. He also exhibited two forstner bits, one of which had the point filed off. Dave swivelled the headstock about 40 degrees to facilitate easier access and, through a small opening, began hogging out with a Munro mini (Owen bend), before switching to a Lister bend to get around the tight bend, and finally a Munro mini straight tool to work towards the bottom. The hollowing approach is depicted in the following picture.

Dave started hollowing at about 850rpm, but ramped it up to 1600 after a time. Holding the tool at centre, he maintained control by wedging the handle against his arm up to his elbow, arm against the body, using the whole body for stability. He used mainly push cuts, but with stable wood push or pull cats can be utilised. As he worked down from the rim, hollowing to approx. 2.5mm to 3mm, he checked the wall thickness with calipers. Dave also used a micro light attached to his tool post to see inside the hollow form, and directed the halogen work light on to the side of the piece to give an idea of the transparency of the thin cut area.

Having finished the bulk of the hollowing, the next step is to make the finishing cuts. This requires a soft touch and is done mainly by feel. Again working your way down towards the foot, dress the surface with fine skims, feeling for any lips and buzzing them down. The final wall thickness is about 2.5mm. Although he never sands the inside of his hollow forms, he will sometimes uses an articulated scraper to apply a shear cut to the finish.

If there is a nub at the centre bottom it is tricky, with a closed opening, to feel where the centre of it is. Dave feels with the tool for the bottom of the nub and lowers the handle so the cutter of the tool lifts and literally breaks off the nub. Then just a few side to side cuts to smooth it out.

For turning off the foot, Dave places the top of the vessel into the opening of a suitably sized vacuum chuck and brings up the tailstock against the centre point on the foot (no vacuum applied). Then nibble away the foot with a spindle gouge down to no less than 8mm, preferably 10mm. Remove the nub and finish with a nice concave curve. (Bruce Wood has built a fancy jig with an adjustable threaded rod with a padded foot piece, and a locking nut. It has various stepped neck sizes and is held in a chuck, with the tailstock up.)

A useful tool, home made from no. 8 wire, is this David Ellsworth designed caliper set.

By touching the wire against the inside of the vessel you can gauge any difference in wall thickness.

At any point during a thin wall hollowing there is potential for a disaster – Dave says he has 20 to 30% reject rate, and that is just the nature of the work.

The club is privileged to have such proficient turners as Dave to share their skills and knowledge. Thanks a heap mate.