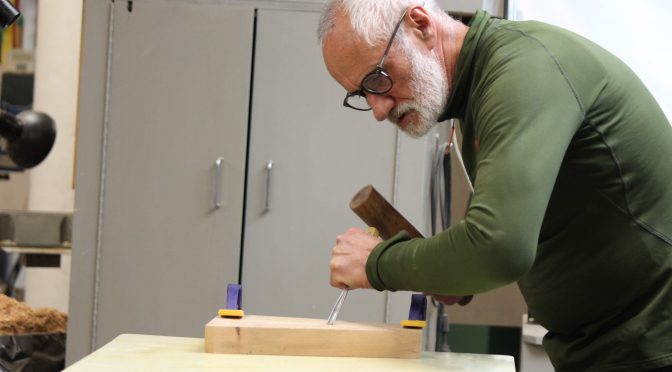 O’Dell introduced himself in Maori and then English with his whakapapa, and very interesting it is. A mixture of Irish and other European nationalities and Ngapuhi and other tribes plus Portuguese! Quite a mixture of European and Maori,

O’Dell was initially in the Army with one of the club members, hence his attendance at the club meeting. His introduction to carving commenced after being given a piece of swamp kauri by his father in law. This experience prompted him to take up carving when he was 45. He decided that he needed to learn Te Reo and the meaning behind Maori carvings. Subsequently, he is now a full time carver and has completed more than 600 carvings. He completed a Batchelors degree at Te Whanana o Aotearoa last year. His philosophy is to pass on what he has learnt to others; “ what I has been taught is mine to share”, he teaches Te Reo and carving

Carving like wood turning takes practice, good chisels and good material to work with. His favourite wood is totara particularly when it is still wet. It cuts beautifully, not so easy when it is dry. You will find that a lot of the old carvings split because they were carved in the same manner.

O’Dell sharpens his chisels with the bottom of the V cut back from the wings (shaped like a waka) and hones them on a piece of 1200grit paper glued to a board; a few strokes on the paper and they are really sharp. His favourite mallet is made of black maire.

In O’Dell’s opinion, the main thing with carving is research. There is a lot of sacredness in Maori carving, all patterns will have a story. In carving there are three key components i.e. simplicity, dominance and contrast. If you take the koru which is a very common design, it is made up of three parts:-

Another example of design is the pattern on the ribbon attached to the QSM medal. It is designed from Maori mythology and refers to climbing great heights to succeed and bringing knowledge back to others.

A wonderful introduction to Maori carving, delivered with wit, energy and deep knowledge. Many thanks go to O’Dell for a very interesting and enjoyable evening.