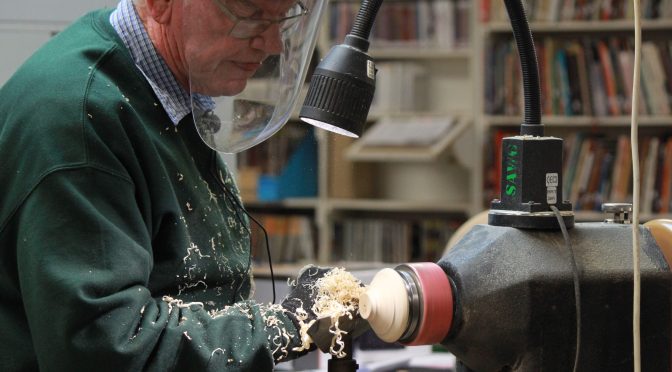 David’s subject was simply and plainly “Just a Box” and he began by showing samples of lidded “boxes” he has made for worthy causes, like families who had lost a child through cancer. In the “Beads for Courage” programme a glass butterfly is placed in the box to commemorate the courage of an ailing child.

Choosing ash for his work, David mounts the block in two 50 mm chucks, one at each end and turns to 100 mm diameter, then re-mounts in a chuck at one end and a steb centre at the other, or two steb centres can be used. He first shapes the body of the box ensuring that the top is straight so the lid will fit snugly.

Once the bottom has been turned to desired shape, David separates it from the lid (top) and removes it from the lathe. He then remounts the lid in the chuck and cleans off the face. He carefully marks the diameter of the bottom on this face and proceeds to hollow the lid. Aiming for a snug fit, slightly on the loose side so it won’t jam. To achieve this it is essential to work slowly and measure constantly.

Once he has the fit correct David continues hollowing the lid and rounding off the outside as far as he can reach around the chuck jaws. Now is the last chance to do any inside lid finishing work and sanding because it won’t be possible when the lid is removed from the chuck.

Next step is to re-mount the lid on a smaller chuck gripping the inside of the lid and using tape or sheet rubber to avoid marking the rim. A jam chuck is another alternative holding system. Now the exterior finishing can be completed. This includes drilling a suitable sized hole (6 mm) for the addition of an ebony knob or finial which will be glued into the hole.

Finally, David re-mounts the base of the box to remove the spigot and complete any necessary finishing.

Thanks to David for giving us a nice end of term project to think about in our club’s quest to do good things for others. (See the SAWG web site under Projects for more information and box plans.)