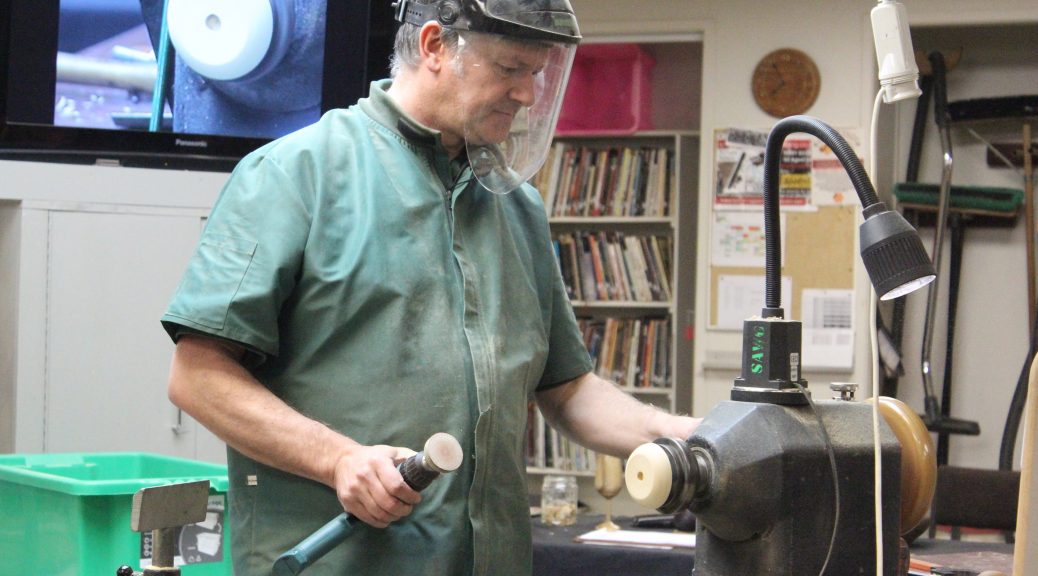 This week we had Ian doing a demonstration. As this terms theme is back to basics, Ian showed us some examples of spindle work shafts with cross grain timber bases. Examples included wig stands and paper towel holders. For the demo, Ian chose to make a scissor and string stand for the kitchen bench. Ian highlighted the fact that these projects are not only good practice for new turners, but they are very economical with the wood quantity and you can make them out of old bits of recycled timber that you might have lying around.

For Ian to make the base for the holder, he first found the centre of the square block of Kahikatea. After checking that the lathe was aligned properly, Ian used a friction drive chuck and a steb centre to hold the wood while he turned off the corners. Ian mentioned that he prefers a steb centre, because it has a spring loaded pin which results in a better grip, as there’s constant pressure against the wood. A bowl gouge is ideal for this type of work, a roughing gouge should be used.

Once the base was rounded off, Ian made a 50ml spigot. He then mounted the spigot on the lathe and proceeded to drill a hole in the base for the shaft to sit in. He did this by using a sharp 13ml Forstner bit. Dropping the speed, Ian made the hole, emphasising the importance of keeping the bit moving so as not to polish or overheat your work. Once the hole was drilled, Ian shaped the base, something that looked good and made him happy. Ian reminded us to always think about your end position, where you will end up after a cut, and to make sure that position is comfortable before you start a cut. Once Ian was happy with the shape, he went through the sanding process using all the grits and tidied up any tear out by hand sanding. The next stage was removing the spigot from the base. Several options were mentioned (between a foam faceplate and steb centre etc) but Ian chose to use two steb centres and turn the spigot down to the steb size. He then retracted the tailstock steb and used a Jacobs chuck and sanding mandrel to remove the last of the spigot.

To make the stand shaft, again Ian marked the centres of the block of wood and mounted it between steb centres. Ian demonstrated using both the roughing gouge and the dreaded skew chisel, noting that turning speed is your friend during this process. By rubbing the skew bevel Ian did some nice planing cuts to round off the shaft. Once the shape was made, Ian showed us the block method of sanding, by holding sand paper over a solid flat surface, you can push it against the shaft to make sure it is even in thickness. Something that is great to do when turning rolling pins etc.

Once he was happy with the shaft, he went on to make the small spigot that would fit into the 13ml hole he’d made in the base. He did this with the parting tool on a slight angle so as to undercut the spigot to make a tight fit.

Next in the process was making the hole in the top of the shaft, in which to hold the scissors. Ian said you could either hold the shaft in the centre of a 50ml chuck, using tape to prevent marking, or you could use pin jaws, which is what he demonstrated. He made the hole using a twist drill mounted on the tail stock. Once the hole was drilled, he used a tiny spindle gouge to smooth out the edges of the hole. Finally there was some shaping done to the end of the shaft and then he assembled it to complete the holder. A great project for those who wish to practice their spindle work and make something useful, thank you Ian!