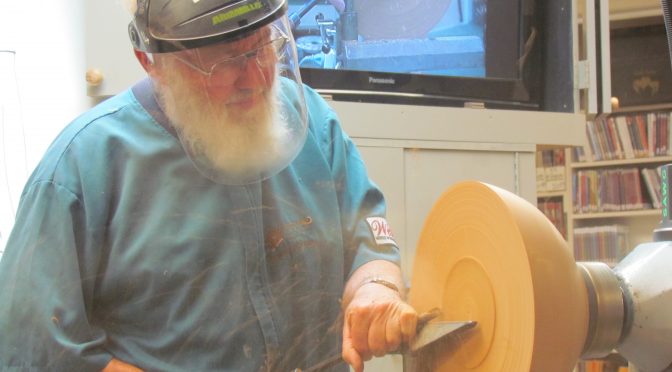 On display on table this evening were a set of four natural-edge bowl saved bowls from a pepper tree that Dick had turned some time ago – this term’s theme is Back to Basics, tonight’s topic was Bowl Saving.

Whilst commonly referred to as bowl saving, other terms may also be implied such as coring or centre-saving. Dick kicked off by giving an overview of the business end – discussing the various clearance angles and rakes on the cutters of three bowl-savers. Two New Zealand manufactured products were on display: Woodcut Bowlsaver and the McNaughton Centre Saver, in addition Dick also covered the cutter on the Oneway, a Canadian coring system. Having owned and used the Woodcut I was keen the see the McNaughton demonstrated but unfortunately the handle was missing in action. This tool appears to offer greater options for coring but Dick stressed this is a judgement tool, that may take some time to become familiar with. Sourcing may also be an issue.  Carbatec are the distributors for Kelton Industries.  Also check the Library for a Mike Mahoney DVD on the McNaughton Centre Saver.
Onto the Woodcut.  Dick covered off the assembly and also showed the difference between the Guild’s bowl-saver and his own which has been modified to accept a longer cutting blade that Woodcut now offer.  Sharp is key with a quick refresher on honing the Steelite tip was useful. Mounting a blank of kauri roughly 350 in diameter Dick commented that he has managed to bowl save up to six bowls from one blank with the Woodcut. Forming a spigot – another useful tip noted was that by using larger chuck jaws these are able to absorb the cutting pressure better when bowl saving. It is recommended finishing the outside of the bowl and if coring green wood this can be achieved by wet sanding. Use of a reversing mandrel makes remounting the blank more accurate – another item for the tool kit. One thing I have noted with purchasing kiwi made woodturning tools is that the manufacturers in the main have good written instructions and advice on setup and use. I still have the video on my early Woodcut Bowl Saver and the advice in the early booklet on setup discusses using callipers to determine the mounting/cutting position. The later models offer templates to assist with setup or an optional extra is a laser guide. Setting the lathe to 500-600rpm in this instance the general thrust, no pun intended, is nice and steady using the body where possible to support the cutting pressure. With the pivot point set some 20mm towards the turner, the longer blade, in this instance, allowed for a clean cut right to the centre rather than having to knock the inner core out if the shorter blade had been used.

Time passed quickly and this was a timely refresher as I have some bowl saving to do coincidentally it is pepper wood that I am planning on coring. Thanks Dick another insightful demo.