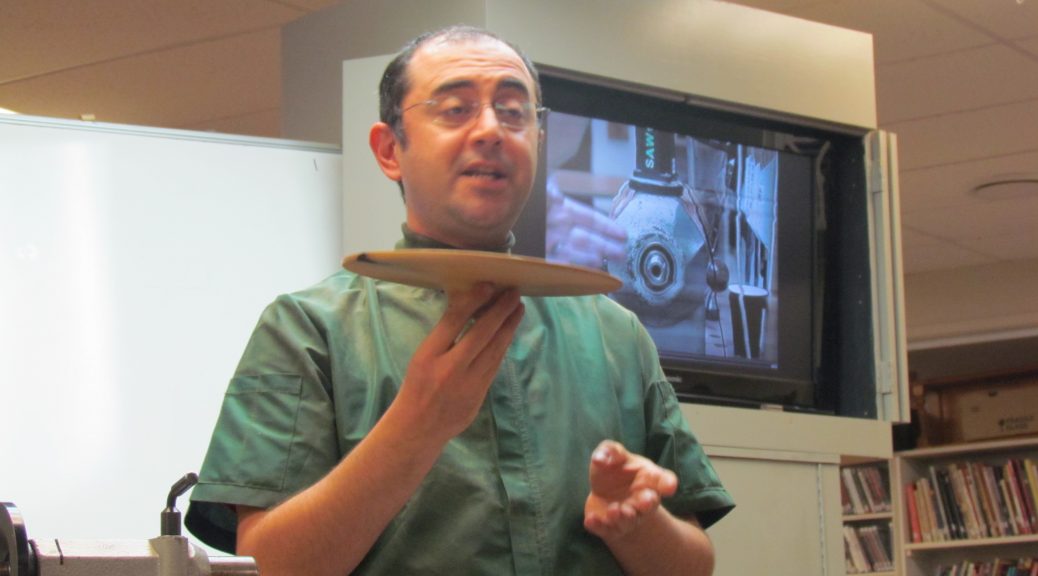 Raed started this demonstration by talking about the size, shape and design of platters. While the SAWG instruction sheet recommends that platters be 300mm in diameter and have a depth of 15% of the diameter, the process for turning a platter is the same regardless of size. Raed demonstrated this by turning what he referred to as a ‘saucer’ – a small platter.

The first thing that Raed pointed out to us was a lesson that he learned the hard way – make sure that your final product is the right size to fit your cole jaws. You will need to turn your platter around and hold it in your cole jaws in order to turn off the spigot.

Speaking of spigots – typically when turning a platter you will have a fairly thin blank, however you should ensure that you have enough depth to create a spigot deep enough to fit your chuck. Other members of the guild suggest that you create one using hot melt glue or a PVA paper joint; however Raed isn’t too sure about these methods. Raed mounted his blank on the lathe, having drilled a hole with a forstner bit and expanded the jaws of the chuck. Alternatively, one could use a screw chuck (if the piece had enough depth) or a faceplate. After checking that his setup was safe, Raed went about turning his blank so that it ran true. He then cleaned up what would become the bottom of the platter and created a spigot.

Raed then started to create the shape of his platter. Raed said that he did not have a particular shape in mind for this piece – he was just going with what the wood showed him. While shaping the outside of the platter, Raed needed to be aware of the depth of the recess which was holding the piece to the chuck to make sure that he didn’t end up with a hole in the bottom of his platter! This is where Raed ran into a little bit of trouble. He was having a bit of trouble with the finish on the outside of his platter. Dick suggested that he check the grain of the wood, and encouraged him to make sure that he was cutting uphill, with the grain. After checking his positioning and trying again, Raed produced a finish that he was much happier with.

Once the outside of the platter was finished, Raed turned the piece around, mounted it in the chuck and started to hollow the inside. Raed reminded us to ensure that your spigot is the right size for your chuck so that the chuck holds the wood securely, with the jaws as close as possible. Raed then started to talk about making a border or a rim around the top of the platter. In decorative pieces, the rim of the platter provides a canvas for the turner to be creative and decorate to their hearts content. On this occasion, Raed made a rim that rose to a small lip towards the centre of the piece then dropped to create the hollow of the platter. Raed discussed one of the problems of working with thin pieces of wood – if it gets too thin it may start to vibrate on the lathe. This will produce a poor finish that can be hard to get out. To combat this challenge Raed ensured that he left a mass of wood at the centre of the platter while he hollowed around it for as long as he could. Once he reached the depth he was aiming for, he then carefully turned out the mass. Doing it this way reduces vibration in the piece and can increase stability while turning.

Finally, after hollowing the piece to a nice finish, Raed explained that he would mount the piece in cole jaws in order to turn off the spigot. Unfortunately Raed’s piece was too small for his cole jaws … but you get the idea!