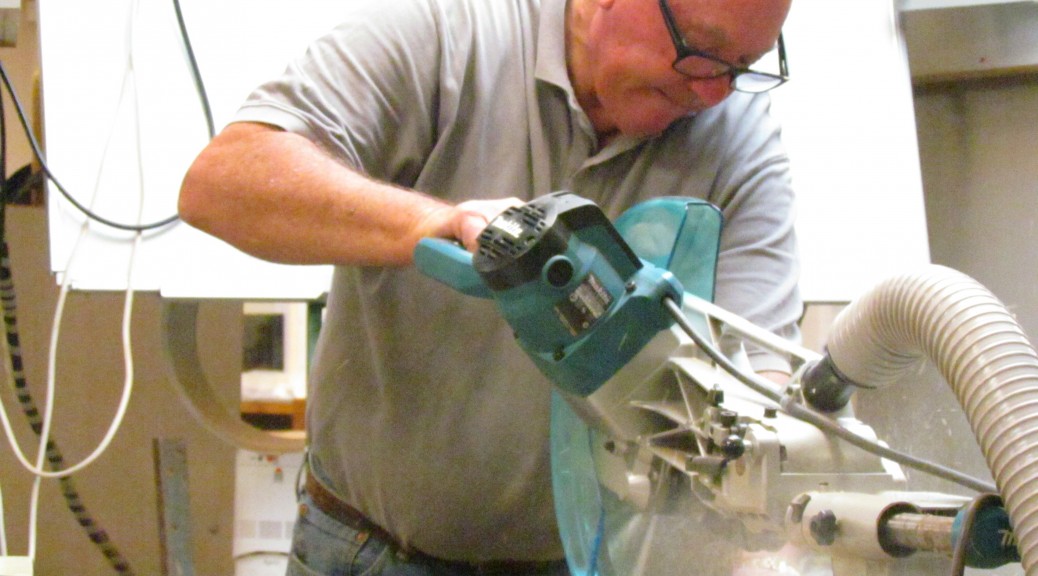 Cam is well known for gluing things together so you can’t see the join, as well as using different coloured woods to provide both contrast and symmetry for his segmented turning. For most of us this is a particularly difficult operation, which generally ends in frustrated disappointment and often a decision that we cannot get the accuracy required so it is not worth it. Also we don’t have the equipment to do it properly and can’t afford to buy it. Cam stressed that it doesn’t require really expensive machinery, but complete accuracy to within a millimeter is needed. To achieve this he has modified his old bench and drop saws to insure very accurate cutting.

With his old bench saw he had made a new bench top from meltica, which fitted over the old top and was clamped to it, with the sawblade lowered below the original bench top. He had then turned on the saw and raised the blade up through the new top so the new hole that the blade ran in was only minimally wider than the blade itself. Cam also stressed the need to have a good quality , sharp combination blade that would cut well for a good length of time. He recommended getting it from a good saw doctor. He would then get a piece of wood with a perfectly straight edge to act as a guide. This needed to be as long as practicable to ensure the wood being cut always ran parallel to the blade. This guide would be clamped to the bench top parallel to the saw blade exactly the width of the required cut. The blade would be lowered to just a few millimeters above the height of the wood to be cut, as this would give the cleanest cut. The wood being cut needed to be pushed through the saw at a steady rate without stopping. Using this method Cam was able to cut pieces on his old bench saw which were consistently the same width along their length and could be as thin as 3-4mm allowing him to cut the narrow bit of dark wood which he glued between the other pieces of wood to hide the joins. The cut was so clean that the pieces could be glued together without the need to further sanding. If sanding was required to make the gluing surface perfectly flat then it was done on a perfectly flat piece of corian bench top that had sandpaper glued to it.

Cam uses an aliphatic pva glue (tightbond) to do his gluing and when gluing, clamps the wood both horizontally, and vertically to ensure a tight bond and no warping. To cut angles in the wood to make wedges (say for a clock) Cam uses a drop saw. Once again, unless the saw is very expensive it is necessary to modify it, by removing the fence at the back and clamping a flat meltica bench top over it. The saw is then brought down and a cut made along the saw travel length. Once this has been done a straight edged backing board can be secured to the new table top exactly at right angles to the saw cut using as big a triangle as possible. Other angles for cutting can then be marked with a sawcut to ensure maximum accuracy.

When cutting the wood into wedges the wood can either be clamped or Cam uses the back-board and a nail in the bench to accurately place the piece of wood to be cut. In either case before cutting the saw is pulled out so the cut is made from the side nearest the operator back towards the backing board on the bench, and the saw is not lifted out until the blade has stopped turning. When cutting wedges from a large length of joined woods it is important to label each piece to ensure that when gluing them together that one piece is joined to the correct next piece so the grain flows evenly around the finished article.

The process of joining segments for a round clock with 12 segments is to firstly join the 2 appropriate segments to each other with a third narrow dark piece of wood in between. Cam had a gig for this that enabled him to glue several sets of 2 at the same time. Once the glue had set the double sets were glued together with a dark strip between to form sets of 4. Then 3 of these sets were glued together with strips to form the completed clock circle. Apart from making wooden objects more colorful and striking, the real advantage of this system of accurate cutting and gluing was the ability to build and turn much larger pieces than would normally be possible because of the difficulty and cost of getting really large single pieces of wood without significant imperfections.

The demonstration was very interesting and useful and showed what can be done with good preparation and how easy it can be to modify equipment to ensure that its operation will be accurate and consistent. Cam made it look very easy, but I’m sure that his 55 years as a cabinet maker helped. Thanks very much Cam.