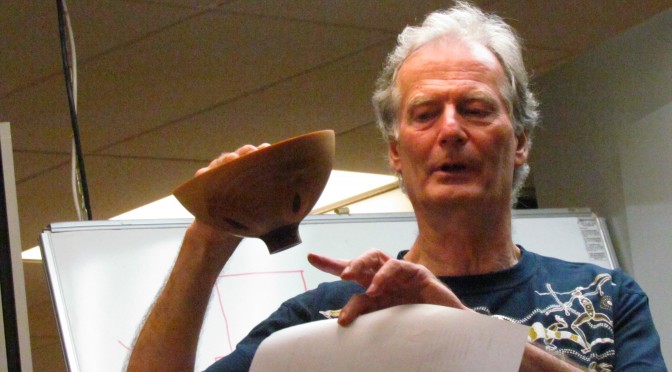 John opened his talk with a bit of history going back to a 1999 symposium where he won a prize for mixed media much to the annoyance of some  of the more experienced  turners.
He then brought some samples and asked which we felt was the most attractive. The ones adding lift to the bowl were more attractive than those with heavy bottoms.. There also needs to be a crispness and a seamless transition from one wood to the next and the overall shape needs to be followed. Grain alignment is important. In addition to placing a foot on a bowl a second wood type can be used on the rims of bowls. These wooden rims can be cut from the outside of a bowl blank when the base is being turned.

John first lined up the headstock and tailstock using an Acculine, this is important to be able to get an accurate finish he then used a piece of teak decking offcut in the jaws using a packer for the depth of the jaws he faced it off and turned it round to the size of the bowl he was going to put it on.

John then used the Granville Harworth method of sanding which consisted of stick on sandpaper pieces onto a square section aluminium section he used two grades on separate pieces of aluminium Square section. The tool rest was used as a guide to lightly sand the bottom with the two grades of sandpaper, not much pressure was applied in this process. This was left on the chuck and the bowl (which was a core from a bowl saving exercise) was mounted on a faceplate and the bottom trued up to the size of the pre-prepared foot leaving the bottom slightly concave which helps to stabilise the sanding process. The base of the bowl was then sanded using the same process. Grooves were then applied to aid keying of the glue. Brush or air blast both surfaces before applying the glue, he used ordinary white aliphatic PVA.

The foot which was on the other chuck was reversed into the tailstock with a Morse taper onto which was screwed the chuck. The end grain of both pieces should now be marked with a felt pen to enable lining up of the foot and the bowl. The glue was now applied fairly liberally protecting the bed with a paper towel from any glue drips. The foot is now brought up to the bowl and rotated as the glue starts to grab finally adding a small amount of pressure once the grain was lined up. The glue should be dry in about 20 minutes but John advises to leave this set up on the lathe overnight to ensure that the bond is fully cured. The following week John brought in the bowl which was only left on the lathe until the guild closed and when turning it found that it was adequately glued and the joint was nice and crisp and accurate.

This is the method that John uses now after experimenting with lots of different methods with a recesses both 2 mm and 10 mm are using a pin off the lathe as a locator pin. He finds that this method is simple and has never had a failure.