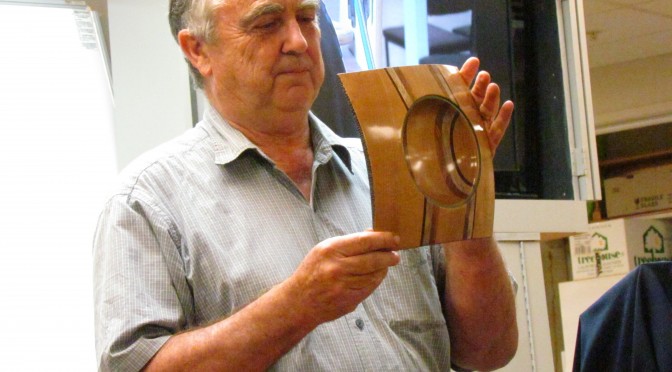 Warwick set out to demonstrate how a bland piece of Macrocarpa can be transformed into an interesting thing of beauty by showcasing the variety and effects that can be achieved by creating square edged bowls with laminated inserts.

Macrocarpa was used with narrow strips of hardboard laminated in an offset cross providing an interesting contrast of colour and texture. Accurate cutting is required for the laminating and one cut was made and glued and then left and then the cross cut and second lamination was made 24 hours later.

When turning, the 13mm gouge was used initially for more stability to minimise bouncing across the woods of varying hardness, and the tailstock was pulled up when possible using a fine bolt to allow for more access. The bowl was turned as normal and the outside edges were turned from outside to in, to avoid tearing out. (Harder wood than Mac would be more forgiving.) The finishing was done with the 10 mm gouge with care being taken to avoid catching the square corners and then a sharp scraper was used to smooth across the join between hard wood and soft. Initially held on a 40mm chuck, the piece was reversed using the new vacuum chuck which provided a very quiet solid and stable platform to work on at about 700 rpm. They aren’t cheap but they are available from Terry.

All in all a highly entertaining and instructional demo. Thanks Warwick.