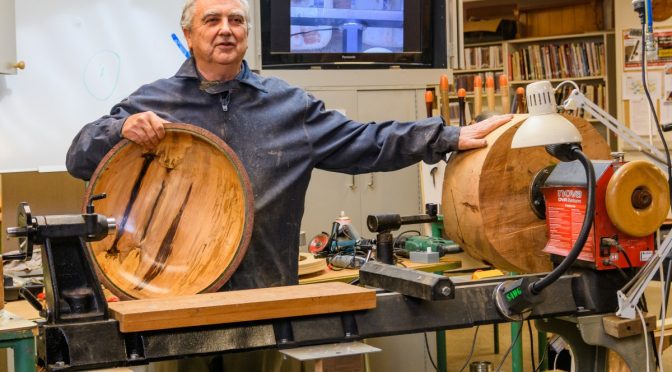 A Warwick Day Demo is a great way to spend a Wednesday evening. Warwick is always well prepared, considered and thoughtful, informative, and his presentation is laced with a dry and self deprecating wit. All good fun which Club members responded well to on Wednesday.

The theme for this term has been “Out of your Comfort Zone” which Warwick took up with some  examples of his recent experimenting. An episode where four litres of resin melted the holding bucket, and chainsawing some “free” kowhai which concealed a bolt raised a few laughs before he moved on to his theme of “Big and Ugly.” 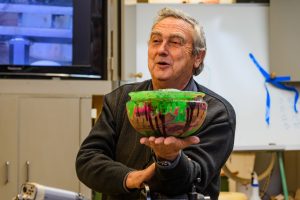 Warwick has been experimenting making oversized bowls, not for the faint-hearted. Getting access to large pieces of wood clearly was a lot of fun and a challenge has been to get these “monsters” on to the lathe and ready for turning was  an adventure in itself. Warwick discussed chainsaw preferences for cutting wood down to size. His choice is an 18″ chainsaw as he found a larger saw was too heavy to manage safely. Two chainsaw safety tips Warwick gave are worth mentioning here: Don’t cut above waist high and make sure no one is nearby while you are working. An early experience cutting branch wood with a skilsaw is a no no, and of course fancy dress is essential at all times while using your chainsaw. 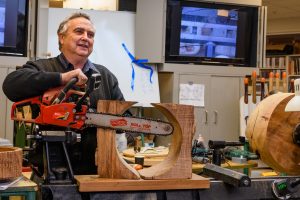 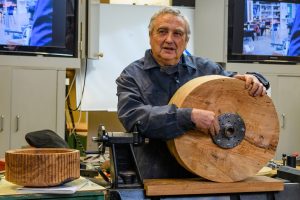 Once your monster slab(attached to a faceplate) is on the lathe, work is needed to shape the outside of the bowl before starting the lathe. Warwick used a Bosch electric saw which he won in a raffle to cut off the rough corners, followed by an electric planer, also won in a raffle, and finally a King Arthur sander. Ready to turn? Not quite. Warwick produced an electrical gadget which slowed down the lathe so turning could proceed at a safe speed.

Turning the inside of a monster is relatively straight forward. If you have the tools of course. Several heavy duty bowl gouges, big scrapers, a DVR outrigger, a big Roly, (and bowl savers if you want to save some wood). Some of Warwick’s collection of tools were also acquired by buying tickets in raffles.

Finishing the bottom can be a challenge. Warwick tried a Harvey but the lathe turned in the wrong direction and basically destroyed all his good work. A jig made out of custom wood worked. Rather clever I thought. (See Warwick for details) 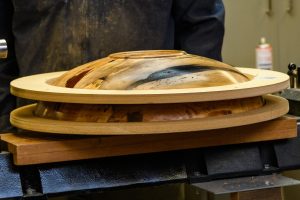 Warwick is definitely not a production turner. He finds a lot of pleasure and satisfaction from trying out new ideas and experimenting. Exploring new techniques and finding solutions to problems on the woodturning journey is a real interest and strength.

Anyone interested in turning the “Big” stuff and needing some advice about techniques and tools should talk with Warwick who I’m sure will be happy to share his ideas.

Thanks Warwick. As always a great demo, and much appreciated.😊