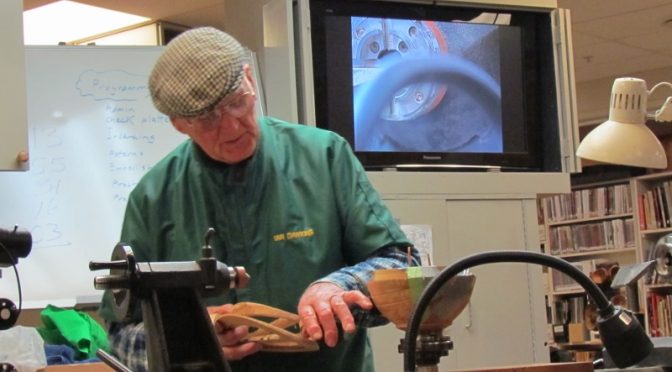 Ian started by regaling us with stories of his youth growing up on the farm, where he started making toys in the workshop from age 13.

He then went on to talk about some of the interesting works he has learnt how to do from attending symposiums over the years, and encouraged our members to attend all that they can. He considers the admission fee a small price to pay to see such a great collection of international demonstrators that it would otherwise cost thousands to see.

Ian then pulled out a sample of the wave bowl that he was going to show us how to produce, as well as a collection of other pieces that had been made utilising the same concepts and equipment. Some of these pieces also included the creative use of builders bog mixed with paint to fill voids instead of resin.

To start off the process he turns the outside of a bowl to the diameter of the widest (or furthest protruding) part of the finished piece. He would then turn the inside of the bowl, allowing a generous thickness to allow room to work (and to try again if you mess something up!). Once this is turned he placed a fillet of MDF inside the bowl to act as an alignment tool for reassembly, which was also marked to ensure the correct orientation for reassembly.

Ian then started showing us the jig he uses to cut the sections out of the bowl. With a square block of wood mounted in a large chuck on the jig, it seemed that half the audience understood what was being shown, and half the audience didn’t know what they were looking at or how this related to a wave bowl. The latter group included a very confused and exasperated Terry Scott, much to the amusement of all present. Once the square block was removed and the bowl put in place on the jig, the penny dropped and all present were on the same page.

Whilst Ian was demonstrating the wave bowl tonight, it is also clear that this jig could be used to cut wave patterns into almost anything, an example of which were some wooden bangles that had been produced from the same jig.

The jig consists of a base board clamped to the bandsaw table, with an L shaped piece of MDF mounted to the top of it. The base board and the base of the L shape have holes and a slot respectively to allow for indexing and pivoting in a circular motion, and the vertical of the L has a slot cut to enable a chuck to be mounted in it. 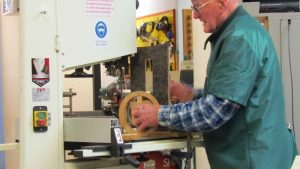 It is important to note that the pivot point holes in the base board must line up with the front of the teeth on the bandsaw blade, as this is the cutting point. This will allow for a safe and smooth radius cut in your workpiece.

Once the jig was set up Ian showed how he would take one radiused cut, advance the jig by the desired amount, and take another cut. This would determine the size of the fillets that would either be turned down further to form the bowl, or left at the current diameter to form the protruding waves. 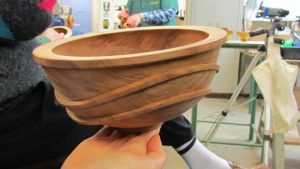 You could also alter the orientation of the bowl in the chuck to achieve non-parallel waves. This introduces all sorts of possibilities for complex patterns and crossing waves. If you have a try with this technique it is important to remember that whatever material you remove (including the kerf of your saw cut), you must put this same thickness back in if you want to achieve different waves all matching up in a single piece. This could be achieved by inserting a veneer matching your saw blade kerf, or by cutting the inserted waves from a different material and allowing for this lost thickness. 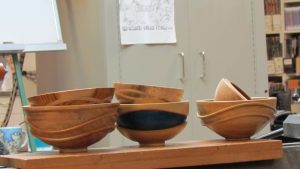 Whilst there were no shavings flying this evening, it was an interesting and amusing demonstration for all present, and it will certainly inspire some new creative ideas from our members.