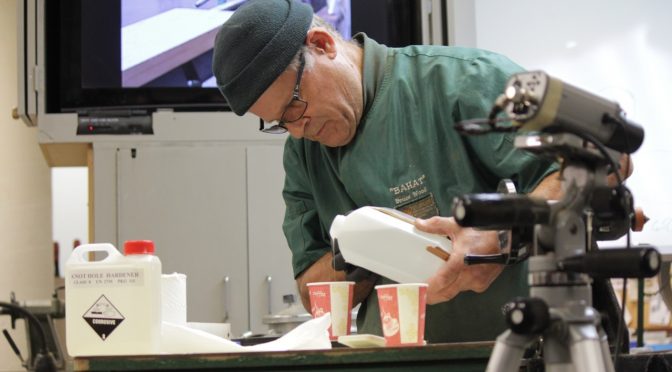 TOPIC: Application and Use of Liquid Polymer Glass

Bruce opened his demonstration with a hand out display of resin moulded pen blanks and a cluster of completed resin pens, some displaying pine cones and seeds. We knew we were in for an interesting night – a great array of dyes, stains, paints, pigment, and bright coloured powders. There was a professional looking pressure tank, a Bahat made vacuum tank, scales, battery screwdriver and a digital laser thermometer. We were in for a treat! Coffee beans – what were they for?

First up, out came the digital scales, two paper pottles, a couple of stirring sticks and Bruce was away. The Liquid Polymer Glass is measured by weight – 50 gms of LPG and 25 gms Hardener into each pot. Coloured powder of choice is added (level teaspoon) Stir like crazy for a few minutes – out with the laser thermometer – temperature 60 degrees. Stir over the next 1 hour – until the temperature rises to around 100 degrees. At this point Bruce prepares a silicone mould ready to pour the liquid into. Pouring both colours into the mould at the same time to meld the colours. Once poured the mould is placed into the vacuum pump system – a large sized drain pipe 300mm diameter approx, 200mm high with a sealed bottom. A large heavy glass plate sealed the top. A small vacuum pump created the vacuum (too much pressure made the liquid bubble so the pressure had to be adjusted to create an atmosphere to remove any bubbles from the resin. 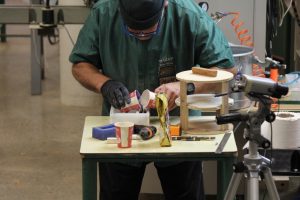 While all this was going on Bruce dismantled a mould made of kitchen chopping boards – screwed together so that once a pouring had set it could be easily unscrewed (using the nifty little battery screwdriver). This was all undertaken with great speed – Bruce spending considerable time wiping up spilt resin and being encouraged by members in the gallery. Dave Gillard was not short of a comment, and on occasion had some good tips for both the demonstrator and club members alike. 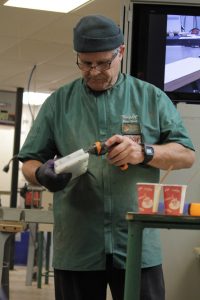 Next we saw coffee beans laid out in a pen sized silicone mould – another brew of LPG and hardener to be combined with white pigment, another stirring stick and Bruce was away again – faster, faster, until all the pigment was well mixed with the resin. This was poured over the coffee beans – a strip of jib stopping mesh was spread over the mould to stop the beans from popping out of the mix. This was placed in the pressure tank which has a safety valve set at 50psi – which meant that the pressure was maintained between 45 and 50 psi. Pressure tanks need to be treated with great respect. 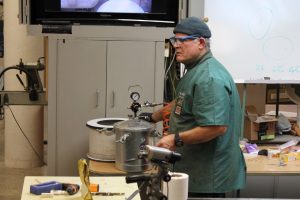 Bruce turned a seasoned coffee bean blank – light cuts as the beans are inclined to chip and they are softer than the resin. No finishing compounds are used so that the coffee aroma can be enjoyed, interesting.

On a more serious note Bruce demonstrated the turning and finishing of a pen blank. Mounted on a pen mandrel at 3000 rpm the blank was completely turned using a roughing gouge. To obtain a high class finish Bruce sanded through all the grades 180/240/320/400/600/800/1200 and then on to the Micromesh, used wet > 15,000 grit. After sanding polish with toilet paper, Diamond polish or Triple EEE. A brilliant finish. Not to be outdone, Terry asked Bruce to demonstrate his latest finishing technique – sanding done with a power sander 180/400/1200 finished. Polished with Aussie oil (similar to Glowax) – an interesting result! 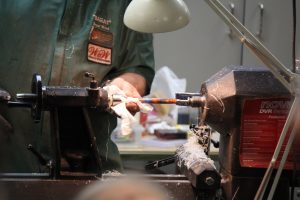 OK Bruce, if I’ve confused things it’s because you showed us so much in such a short time. We are very appreciative of your expertise, energy and skill. Thank you.