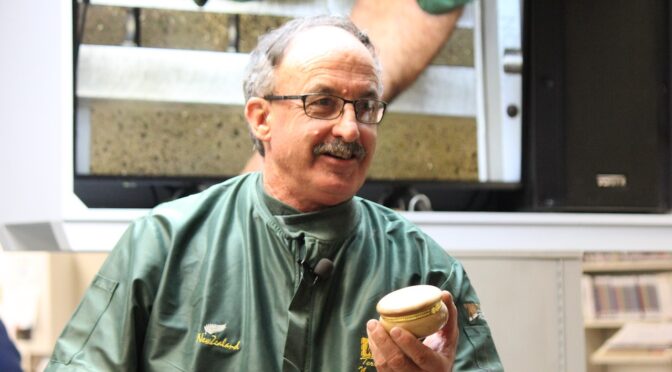 In keeping with the term theme of butterfly boxes, Terry’s challenge was how to make a lidded box which was different from previous demonstrators. His response was to add bling. “If you’ve got grandkids, they’ll love it”. The bling in question was a hinged collar separating the top and bottom sections of the box, which allowed the top to swing up without detaching. The bright gold and decorative sculpted and inlaid finish provided the bling.

Terry passed around several beautiful boxes that he had prepared earlier. Not all were hinged, one had a paua bangle from the $2 shop, others had various ornaments on the lid, also from the $2 shop, and another incorporated a tea light candle in the top. Terry sounded a caution about keeping protection between the wood and the candle.

The demo got off to an ominous start, when one of the boxes spilled on the floor and the lid was broken. Whether this unsettled Terry remains a mystery, because like any professional demonstrator he was quick to cover up any whoopsies in his demo with a quick dollop of humour.

Terry started his demo by taking a piece of kauri approx 100mm x 100mm. He mounted this cross grain in the lathe using steb centres. Terry explained that the idea of mounting it cross grain as opposed to the more traditional end grain was that it better displayed the chatoyance and grain pattern in the wood.

Tip: Clean the top of your toolrest with your sander and finish with a bit of wax to give a smooth surface for your chisels.

The first step in the process is to round off the piece. Terry chose a fingernail grind bowl gouge, not a spindle roughing gouge, because it is cross grain. After cutting a spigot at the tail stock end, Terry turned the piece and mounted it in the chuck. Then he cut a spigot at the other end. Remember to leave a centre mark on your spigot for when you need to line up your tail stock later. As he was cutting the spigots, Terry demonstrated some rights and wrongs, and showed the effects of a spigot that is too long for the chuck, or a shoulder that is off round.

Next Terry parted off the piece which would become the lid.

Tip: If using steb centres, do not part all the way through because the pressure of the spring mounting can cause an accidental dismount.

Working on the bottom part of the box, Terry trued up the face. He used calipers to measure the hinged bracelet and transferred the mark to the wood, in this case 75mm. He cut the rebate which would hold the bracelet from the face, not from the side, so as not to rip out the grain. Match the fit of the bracelet to the cut. There was discussion about whether the butterfly on the bracelet goes up or down – Terry thought it was optional and he preferred the butterfly to sit on the bottom of the box. Janet’s preference was that the butterfly goes on the top of the box to give a fingerhold for lifting the lid. Either way, a small v cut is needed to ensure a good fit.

Before hollowing out the bottom of the box, Terry drilled the centre as a guide to the depth. Then he demonstrated hollowing using both a bowl gouge and a cup tool. The bottom can be finished with a negative rake scraper, but, as always, remember that a better finish can be achieved if rubbing the bevel. To finish the bottom, Terry power sanded starting with 240 grit, and going through to 400. Before sanding he applied U-Beaut Aussie Oil, and finished with U-Beaut Shellawax over the oil.

Tip: Texturing can be useful to hide any torn grain.

Terry removed the bottom from the chuck and mounted the lid piece. As with the bottom, he trued the face and marked the correct diameter to accommodate the bracelet. He then cut a spigot to hold the bracelet, with a slight undercut. Holding the bracelet on the piece, Terry pencilled another mark for the inside diameter. He then hollowed to this mark, and sanded and finished as per the base piece. Terry’s advice is to add texturing inside the lid and to frame the textured pattern – this adds an element of surprise when the lid is opened. Paua dots inside and out are an alternative decoration to the lid.

Next step is to remove the tenon from the bottom. Terry used a jam chuck and paper towels to firm up the fit, but advised that hot melt glue should be used if necessary. Bring up the tail stock. Shape the bottom to your desired shape. To remove the nub, Terry bound the wood to the jam chuck with copious quantities of masking tape before withdrawing the tail stock.

Tip: A $19.95 glue gun from Bunnings or Mitre10 is better than a glue gun from a craft shop. Glue sticks vary considerably in quality also, Bosch 714 glue sticks are best.

Tip: If it is cold heat up the work with a hot air gun, or use a heated up metal face plate.

Repeat the process for the lid, again shaping the top as desired. Terry created a dome and applied a small bead near the bottom of the lid, then a variety of framed textures, and several concentric circles around a small finial at the top. This was followed by a quick sand, then gilders paste applied with the finger to the lid while still spinning on the lathe. Terry used Aussie Oil to fade out the colour of the paste.

The hinged bracelet should be glued with dots of 5 minute Araldite applied at “o’clocks” around the circumference.

Tip: Do not ring the entire piece with glue in case of movement in the wood.

Tip: Do not use superglue because it may run down the side of the box. It also gets brittle over time.

Terry’s dialogue was excellent; each part of the process was described in detail with plenty of tips and much humour. The main message Terry imparted was to rub the bevel and maintain tool control.