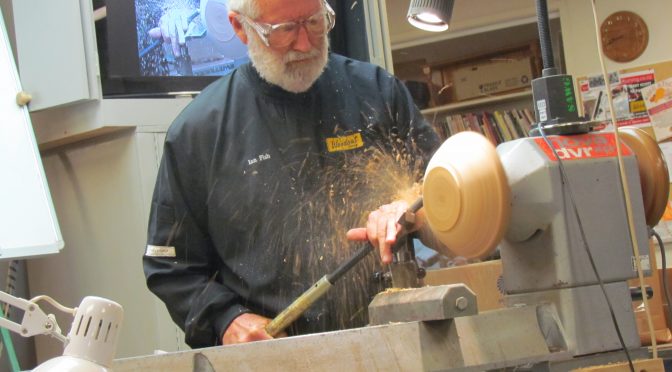 What a great evening with Ian Fish. I thoroughly enjoyed his presentation, beginning with his explanation of the part he played in the history of woodturning in New Zealand and then moving on to the more practical skills of using tools and turning wood. Ian brought along a number of boxes filled with examples of turnings he had produced over the years. He brought pieces out of the boxes and described the journey he took as his turning developed from turning basic bowls to being a recognised artist in New Zealand. Most impressive was the thin wall turning. While we take it for granted today, this was something new and innovative in the turning and art world at the time. Ian said that he wanted people to be surprised by the light weight of the bowls when they picked them up. He thought that his pieces were “mostly useless as utensils, but are nice to look at”.

Ian had a little involvement in helping Nova with developing the DVR lathe. I especially enjoyed the story of testing out the gyro in the DVR. Ian took the headstock off the bed and while holding it in his arms, turned the lathe on at 3000 rpm. (Don’t try this at home) The gyro resisted his movement when he tried to walk. Ian said that it felt like walking in slow motion. Ian completed the evening with a short turning demonstration which was full on verbal maxims and good advice. For example:

“Thou shalt rub the bevel with determination and persistence.”