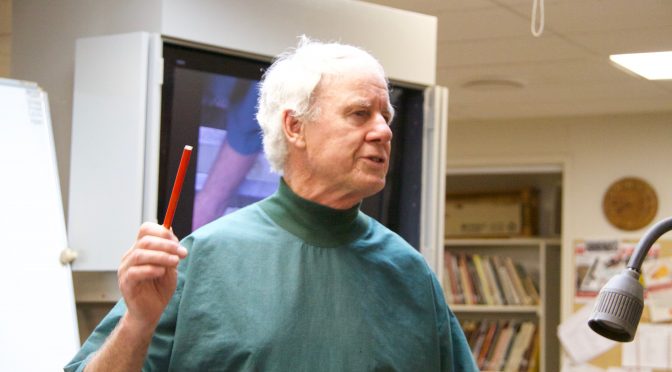 Once again Phread had a rave about the basics and fundamentals of turning wood and explained tool presentation and tool grind angles appropriate for his projects. He considered his demonstration simple using basic techniques but with a lot of detail. His preparation was well thought out showing us a drawing of all parts and associated measurements including a full parts cutting list.

Phread started the penguin by putting a 160mm piece of 2” x 2” into a chuck and bought up the tailstock to hold it centre. He set the lathe to a comfortable speed then roughed it down to size, not missing the opportunity to demo the roughing gouge and body stance in the process. He then made a finishing cut with his scary tool, yet again using the opportunity to demo the cut by showing his wooden tool mock up with grind angles and presentation to the piece. Next he measured out the elements of the project (body and head) and made marks on the wood accordingly, then turned each part to its finished size. Without missing a beat, Phread took his Awl (point made) and marked a position on the head section for the nose (oops beak) and drilled a 6mm fixing hole on the mark. Final rounding over of the head shape he then cut it off using his Japanese saw. Phread trimmed up the neck face of the remaining body still in the chuck using his favoured skew and also did a cut showing the use of a bowl gouge in the same place. That face cleaned up, he proceeded to drill out the inside of the body with a forstner bit. He then showed his technique for hollowing out the inside using a spindle gouge and finally he used a special tool to reach the final wall thickness providing the correct internal tapper, then parted off the body from the chuck again with his Japanese saw. Phread had pre-made the legs, feet, beak and wings and discussed how he made the parts, then fitted them and assembled his Penguin. When completed correctly Phread assures us the Penguin will walk. With a little humour he acknowledged the beak was a little long (about 800mm) but the real thing needed to be shaped and a whole lot smaller. Thanks Phread for another very entertaining demonstration.

Note – Phread acknowledges that he should have reduced the lathe speed when doing the internal boring of the penguin. It is good practise to do so and he will endeavour to do so in any future demonstrations.