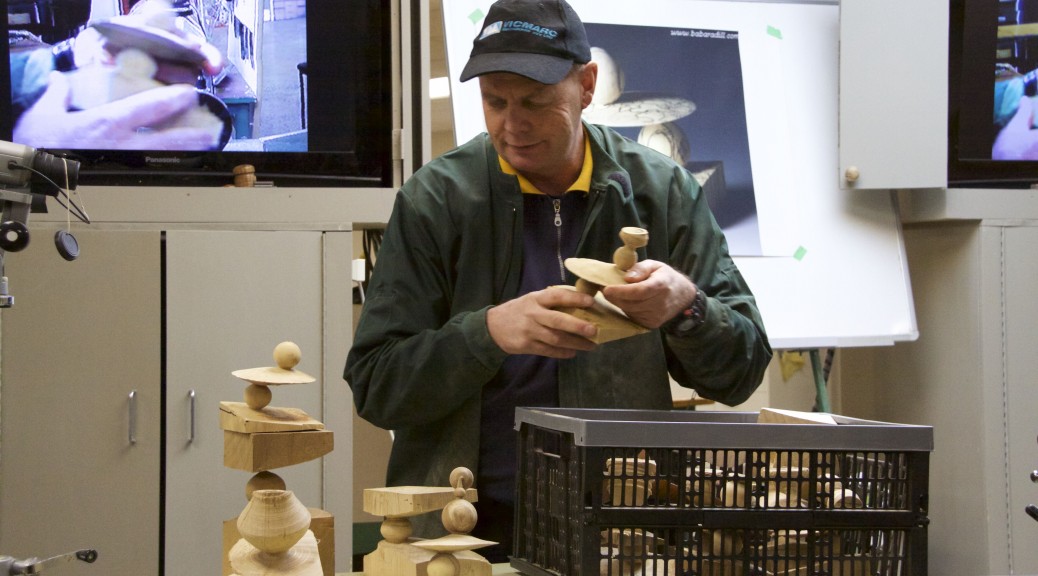 Gary shows us half a dozen trial pieces of work he had to do to get it right !  The inspiration of this piece came from Barbara Dill.

While starting his project at home, he had a loose fitting garment, and unconsciously slid it over the tool rest, while he was concentrating on the job in hand of trying not to let the off centre work strike him in any way ! now his left arm is entangled with the tool rest, he was trying to turn the lathe off, but couldn’t reach it with his right hand ! but eventually managed it ! phew, now he has a remote off switch, – once bitten ! For our Demo he has a block of timber 110 x 110 x 130 mm, makes lines both ends from corner to corner, makes a centre mark, then another centre mark 35 mm along one of the lines, and at the other end a similar mark but in the on the other side of the centre mark, so it will look like a diamond when it is spinning !
Using a hand drill with a Forstner bit in, he drills shallow holes at a slight angle so when he has the block off centre, the two steb centres, one as a driver, and the other live,  will have a flat surface to push into. Gary offers the block up to the headstock steb centre, he brings the tailstock up and locks it with the Handle on the downward side, as recommended by Champion Wheel Maker – Brydon, The work is marked around with black lines to help guide the gouge while it’s spinning, and blue lines to show where the sphere will be, a 100 mm tool rest is brought up,and the block spun by hand to make sure it is all clear, Gary has a long Carbatec Universal Gouge handle, and fits a Bowl/Spindle Gouge with a 30 deg grind to it, gently offering it up to the spinning block rotating at 500 rpm, and we can hear the hit and miss, tic tic tic as the wood spins, and Gary is watching not the gouge, but the shadow on the top, working one side, then the other gradually deepens a groove, while pressing down the gouge firmly on the tool rest, to get a clean cut.

Gary stops the lathe to measure the width of the gap, and now he can change the 100 mm rest for a 30 mm to fit inside the groove, scary turning eh !
Gary recommends reading the article on Off Centre Turning by Barbara in the AAW magazine, now making deeper cuts while the wood wizzes past at an alarming rate, not a time to lose your concentration !   Now turning a ball at the bottom of the tapered groove, and widening the sides, Gary says be careful not to hit the right side while widening the left  or vice versa, now cutting the base next to the headstock end, he says Nick Agar uses an under hand grip, not possible with this rest, He has made a `Bow Sander’ to sand the ball, so instead of a bowstring, a long strip of sandpaper is stung between the ends, so he is able to sand the little ball while keeping his digits away from the spinning work, he stops the lathe and uses a Hot Melt Glue Gun to glue wedges in to support the unsupported nascent sphere, he says Barbara turns at a higher speed, and gets a better finish off the gouge,  check out the Web Site on Multi Axis Turning, doing lights cuts outside the tailstock end, and quickly gets the required shape. He recommends a book by David Ellsworth which suggests keeping the right hand further back on the gouge handle for greater control/leverage, left for left handers, he says one time he was at home and had to re-tighten the tailstock out several times, only to find the headstock was moving backwards !! Speeds of 800 rpm now, holding his gouge handle close to/touching his body, he didn’t complete the Off The Edge Sphere, but says at home it takes about 1 & 3/4 hours.

Questions are asked for, and answered, this was a really good demo, – of something we might not have thought of trying at home,
Thanks Gary for showing us how to, and not be afraid of the spinning lump of timber !
Cheers Mate,
Alan Day