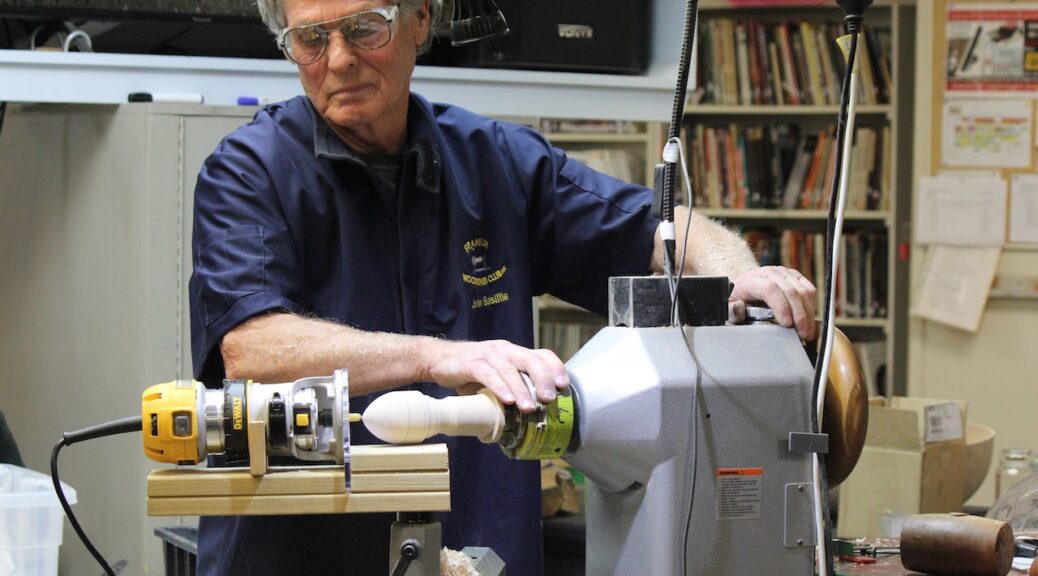 The last night of term is always an enjoyable affair, with the Life Members Award and prize for the term project. We had a member from the Child Cancer Foundation come and judge the best butterfly box, which went to Bruce Wood. A great effort from all the members who turned a box for a great cause. After the prize giving we moved on to a demo by John Balsille.

John started by going over his early days of turning and how he focused on repetition spindle work. He quickly found that the things that sold at the market and Xmas sales, were things that were quick to turn out.

Useful/functional items, such as paper towel holders, ring holders, spinning tops, door wedges, sock darning mushrooms etc. So for this demo he decided to show his process of making a lemon squeezer.

He started with a 150-200mm long cylinder of London Plane, held in a 50mm chuck. He then marked out the the sizes of the shoulder, handle and centre using a premade template. After he shaped the point and shoulder of the squeezer and a rough shaping of the handle, making sure to retain the thickness in the handle so to keep the strength.

Then the fun began as John set up his router on a home made gig attached to the tailstock. The gig allowed for rotation around the squeezer, keeping an even distance. Then using the indexing on the lathe, he routed out even groves along the length of the squeezer. Here he also pointed out that this was an easy way of turning out clock inserts, as opposed to turning on the lathe.

Nice to see a new tool/technique here, albeit slightly noisy. Once the grooves were complete, he removed the tail stock and finished shaping the handle. After a quick sand he parted it off with the skew and Voila one delightful lemon squeezer. A great little demo, thanks John.