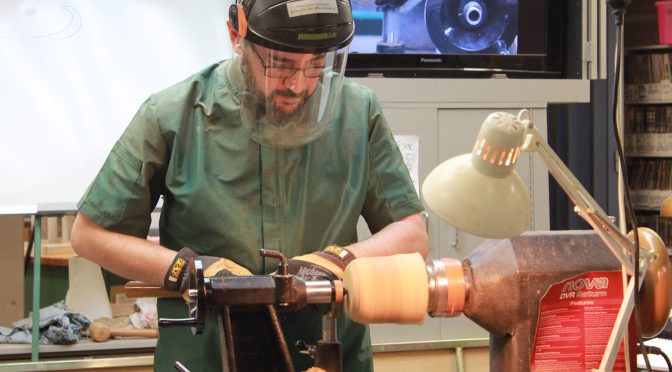 The challenge for this evening was to produce a bowl made from a 125mm Rimu cube using only the “Ellsworth Signature Gouge”. Raed then explained and demonstrated the various cuts made with this gouge.
(The cube was already mounted on the lathe using the screw chuck method.)

Roughing Cut- Raed explained how to present the gouge, axial pitch of the gouge 45 degrees, shaft horizontal on the tool rest. He then identified the cutting area of the gouge. He then proceeded with the removal of the corners and the rough shaping of the outside of the bowl. Using the gouge in this manner, large quantities of wood can be removed very quickly; the surface left on the wood however is pretty rough. 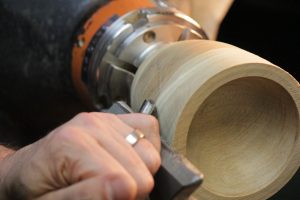 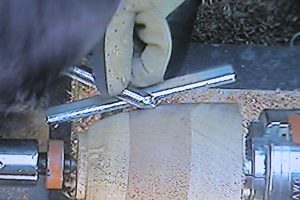 With the shaping of the outside completed, it was now time to finish the outside of the bowl by using the shear scraping cut.

Shear scraping Cut- Gouge presentation, axial pitch 85 degrees, shaft 45 degrees on tool rest. With this cut, Read was able to put a very smooth surface on the bowl. Only minimal sanding would be required to finish the exterior of the bowl.

The bowl was now remounted using a scroll chuck.

With the roughing out of the interior of the bowl completed, the Interior Finishing Cut was used to make the final cut on the interior in preparation for sanding.

All in all it was a very well executed and interesting demo. Thank you Raed.