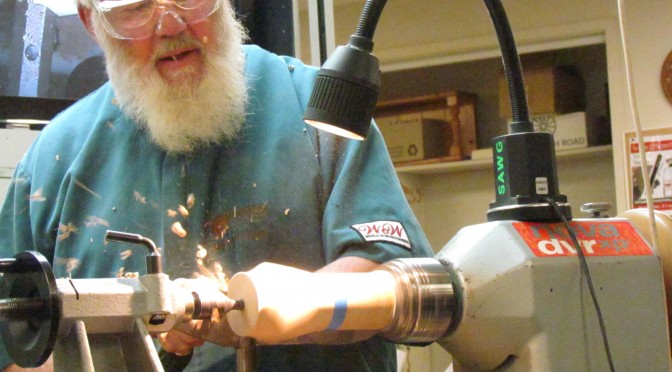 By my count eight axes less than the “Bean” this time a modest five, this multi axis demonstration is an adaptation based on a Mark Sfirri turning. The intention is to portray squeezing the last drop from the bottle.

Dick started with a piece of Taraire (Beilschmiedia tarairi)100mm square by 270mm long.  The SAWG Beginners Guide to Woodturning states about Taraire “May be described as a slightly pinkish tawa and some heart wood can be brown. Turns easily and polishes well.”

Now from here on this report is a rather easy affair and you have two options you can skip to the Projects page and down load the PDF titled “The Last Drop” here Dick has again provided yet another  excellent resource sheet, or plough your way through my ramblings.

At one end mark centre on the other end markout and then label the five axes A through to E all these are marked on one diagonal, for a very accurate layout a knife instead of a pencil may be utilised with the use of an awl to mark the locations. Mount the base in a chuck with some form of protection Dick used a piece of drain pipe, hollow out the inside, if using a forstner bit check there is enough remaining wall space verses the forstner bit selected size. With a freshly sharpened bit keep the bit moving when drilling and ensure shavings are exiting, turn the handwheel reasonably quickly. After hollowing out, tidy the inside base of the box with a Soren Berger or tool of choice. Next fit the lid to the box.
The following is the order for mounting B,A,C,D and E.

From this point on it may be easiest to refer to the project sheet, moving the piece between the various axes forming beads and coves on the neck with sharp crisp connections, along with the cap the bottle started to take shape. During these stages one could be forgiven if the connections between the various axes left them a little contemplative but by the time the final cut was made on axis E everything fell into place and the last drop emerged.