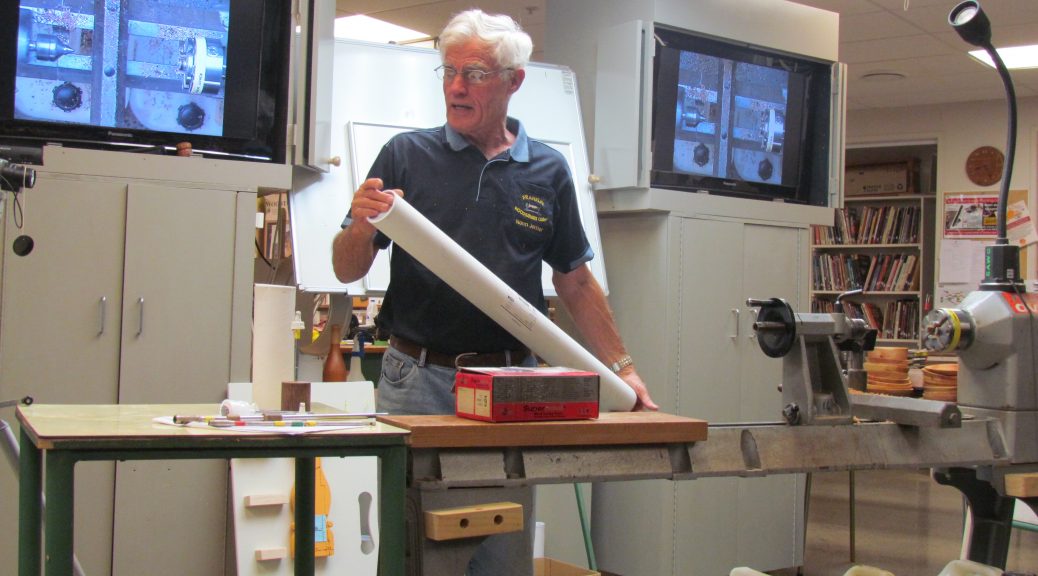 Norm knows quite a bit about pepper grinders.  So lets get the confessions out into the open straight away.  This writer has never made one.  But this will not stop me describing Norm’s presentation.  I do know that I will make one in the future as it’s not too daunting.
Instead of turning timber Norm has a presentation board with the stages of the process in live form mounted upon it.  He then described each stage and some of the pitfalls that he had to overcome.  In discussing the presentation with another woody it was mentioned that you can see five or so pepper mill presentations and they will all tackle the task in a different way.

Now having shown how Norm went about the evening’s demonstration it’s not going to be written up here with all the instructions on how to make pepper grinders.

It is very clear that this is just not possible and if an error in the process is made then it’s in fact not even helpful.  But don’t fret if you want Norm’s detailed instructions given to the writer on the evening then contact South Auckland Woodturners Guild’s Secretary, provide your email address and a copy will be sent to you.

Norm’s presentation was relaxed, interactive and covered all the trouble spots involved with turning pepper grinders.  With no actual turning the subject matter was covered quicker than it would have been otherwise.  However if we had turned one from go to completion it would have been very late indeed when we left our clubrooms.  The Crushgrind mechanical grinding mechanism is the preferred peppercorn grinding mechanism.  Cheaper mechanisms should be avoided as they will just not last.  Only two pepper grinders had been returned with problems.  Yes one of them had just simply run out of peppercorns.  Obviously Norm makes quality grinders.  He likes Forstner bits for doing the drilling and even though he sharpens them contrary to good practice ( honing the flat and not the bevel is good practise ) he has never had a problem.  He uses a very narrow saw when parting the top from the base.  The basic reason is to preserve the grain.  He likes Danish Oil to finish the grinders.

So the evening came to a close.  Norm did put a few shavings onto the floor just to give the nominated sweeper a job to do that night but this small part of the evening was not about pepper grinders.  Thank you for your demonstration Norm and yes I will have a go at making a pepper grinder.