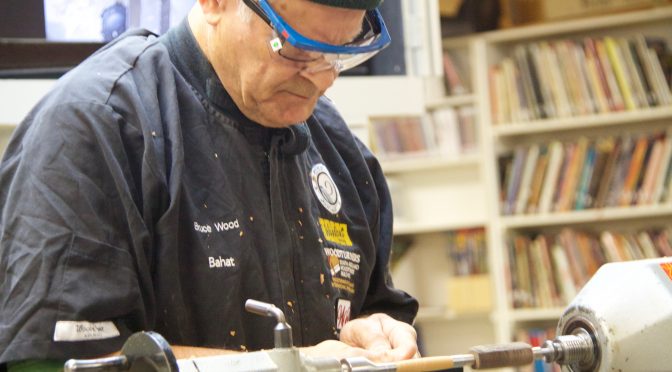 This was a great night of fun and instruction. Bruce’s experience certainly came to the fore as he set out to show us various different ways to embellish pens. He brought with him a display box filled with pens with many different types of texture and colour. He began by turning a blank using a skew chisel. 2500 rpm and the shavings flew off the blank in a hurry. Bruce didn’t bother with sanding. He had a good enough finish straight off the skew for what he wanted to show us.

Out next came the “Timberly Texturer”. A few seconds of application on the wood was all that was required to put a knurled pattern on the pen barrel. This was followed up with black guilders paste. (Black is one of Terry’s best sellers) The second demonstration was with the Sorby spiralling tool. Bruce used a piece of Swamp Rata for his blank, and turned this down until round with parallel sides. He explained that the ends can be turned down later after the spiral has been cut. Bruce got the lathe running at 800rpm and applied the spiral cutter. This created a very clean cut spiral. When asked, he did think that the tool could be turned the other way and re-cut to create diamonds on the wood. This would only be possible on a hard piece of wood like Swamp Rata. Softer woods would just break out the edges and not give a clean cut. Bruce then showed us how to use the Beal Pen Wizard. This is like a little router which he used to carve out four “wiggle wiggle” grooves in a pre-prepared pen blank. These grooves were then filled with coloured resin. When hard, (also pre-prepared) the blank was mounted on a pen mandrel, turned and sanded as usual. Another interesting variation on pen making. Pen makers can take a lot from this demonstration. The options seem endless, and Bruce seems to have tried most of them. Not all ideas will appeal to every person, but there is certainly plenty of scope for using or modifying Bruce’s ideas.