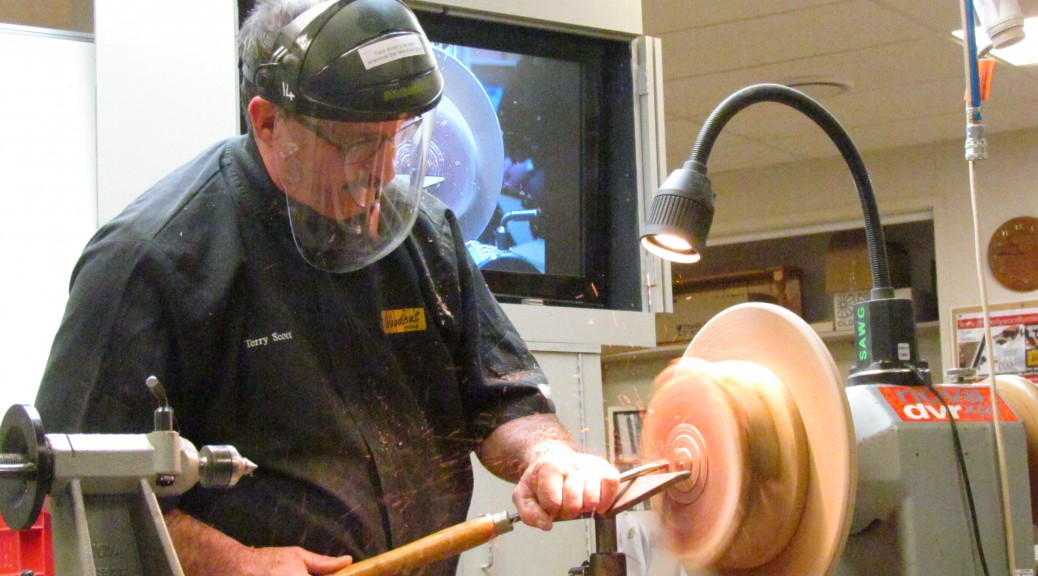 Terry started by first giving us some general information about the wood, being Coolabah Burl (Eucalyptus Coolabah, found throughout Australia)
The burl is water blasted under high pressure to remove the bark and further processed in order to satisfy NZ customs. Typically there is a 24% moisture loss due to processing prior to importation into NZ.
Next Terry showed us a typical “flywheel” (can be made from custom wood or preferably from plywood)
The flywheel is used to attach the burl and also to balance the off centered burl.
A few examples of off centered turnings were shown.
Next the center of the burl was determined. Terry then demonstrated how to attach the wood onto the flywheel. This was achieved by using a packer board, spacers/wedges and a glue gun and plenty of glue!
The packer board is then positioned and fastened with screws to the flywheel. Terry then removed all this and replaced it with a pre-mounted burl already fitted to a flywheel. (Center of burl at center of rotation, tailstock in place) It was noted that this assembly was already sufficiently balanced.
The assembly was first rotated by hand before switching on the lathe at a slow speed, and then gradually increasing the speed to approximately 650 RPM.
The face of the burl was now turned. (Light cuts and rubbing the bevel)
Terry then showed us various pieces of lead used for balancing. Balancing is achieved on the lathe by attaching sufficient lead weights on the flywheel to offset the out of balance of the off centered burl. In this instance only 1 screw was used to balance the assembly.
With the tailstock removed the face of the burl was now completed using light cuts, followed by scraping. With the flywheel still on the lathe, the burl was removed. (Including packer board, spacers/wedges)
Next a number of overlapping off centered circles were drawn on the finished face of the burl.
Then the burl was fastened again to the flywheel, with the first bowl centered on the tailstock. The burl was then balanced as required using 3 lead weights secured with 2 screws per weight to the flywheel. Webbing can also be used to provide additional security.
The assembly was first rotated by hand again before switching on the lathe at a slow speed. (Beware of the off centered rotating burl)
With the tailstock removed the first off centered bowl was turned using a 35-degree bowl gouge. Terry then finished the bowl using a ring tool (tungsten carbide ring) starting at the bottom of the bowl at approx. 80% and then rotated slightly as the cut progressed to finish the inside of the bowl. The bowl was then finally finished with the use of a negative rake scraper. Next the burl and packer board were repositioned on the flywheel, by lining up the second bowl centered on the tailstock, and again fastened to the flywheel. This was then followed again by balancing.
The second bowl was then turned. First a 35-degree bowl gouge was used (light cuts, as cutting into the first bowl) followed by a 55-degree bowl gouge to finish the bottom of the bowl. Final finishing was done with the negative rake scraper. (Very light cuts)
The third off centered bowl, sanding and finishing with Danish Oil were not carried out due to lack of time.
All in all a very interesting demo with lots of additional information provided and as usual very well executed.
Thank you Terry.