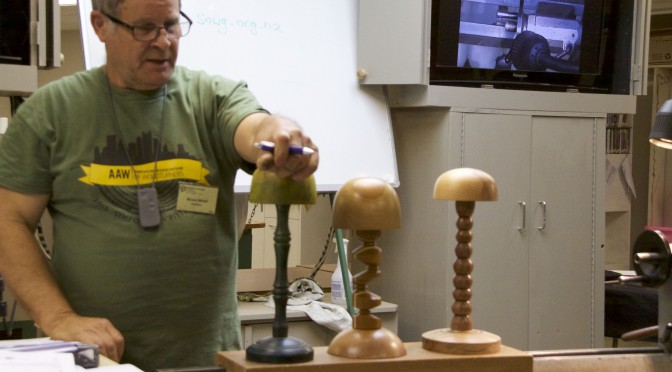 The evening started with informative information on projects the club supports –

For those new to the club we had a run through of how the Papakura sale of woodturning works.

The evening was to be a montage of demos of items suitable for the  Sale but because of the interest about the above was cut a little short. He said he normally finishes the foot which is turned to 47mm so that the 50mm jaws grip all the way around the spigot not leaving a mark,
He then proceeded to turn the back of the bowl from the headstock side ,a difficult task for many as this was turned up hill which would normally leave torn grain to die for .He had obviously perfected this  method as a smooth finished that would have need little if any sanding at all Next He cut a grove at the rim with  a parting tool  3mm deep .This was so that the bevel had a shoulder to rest against and if he did have a dig in the side of the cutting tip  would be pushed clear.
He used a 35 degree 13mm bowl gouge on the bevel to shape the inside of the bowl
A Teeth biting moment was then had by many in the audience as he proceeded to cut from centre out, tool upside down. Yep you guessed it another very clean curve and finish, Sorry for doubting you Colin you sure had me sitting on the edge of my seat but be assured Ill be trying your technique on my next small bowl.
Thanks to both demonstrators that had put a lot of thought and planning into staging their respective demonstrations.
Cheers
Terry Scott