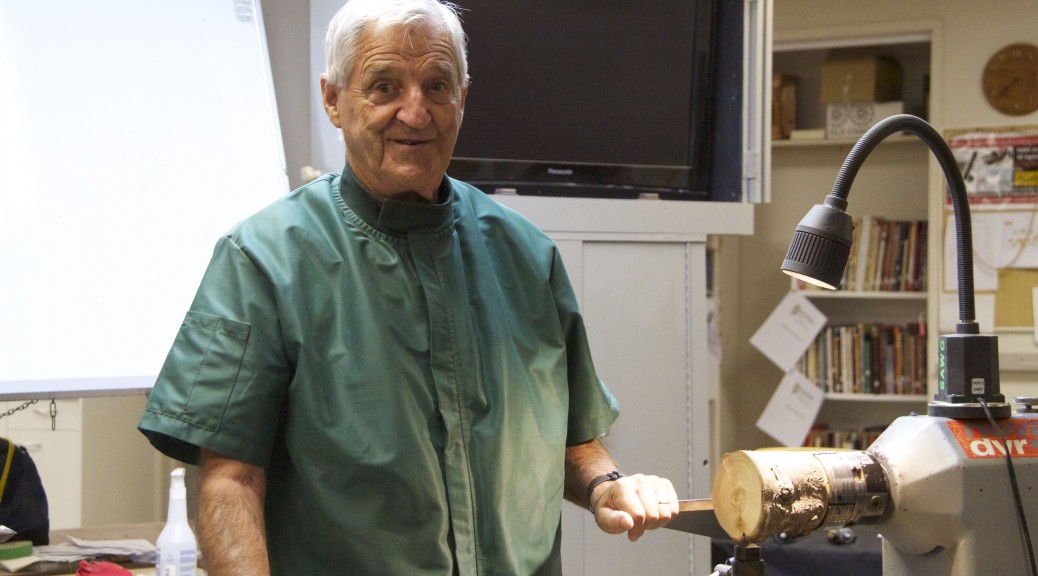 There was the suggestion at the start of this demonstration that the outcome would be a ‘natural edge goblet’ – which attracted the attention of the most cynical present, but proved not to be the case. Confusion was probably caused by the starting point being a section of plum branch, au naturel, complete with bark. Another diversion involved debate about the difference between a goblet and a chalice; the latter being for religious booze whereas the former isn’t.

The plum timber had been in storage for several years so was decently dry. A section some 100mm diameter was already held in 100mm Power Grip Jaws with about 150mm protruding. The PG jaws are a good choice for aggressive spindle turning without use of the tailstock since the spigot can be up to 30mm long and is therefore very strong. At 1200rpm, this was turned to round with a spindle roughing gouge to enable examination of the timber for any defects that would influence the final shape. A 50mm spigot was turned at the tailstock end for reversing. This would be the base end. It is Bruce’s preference to use a cup tool for hollowing the inside moving from centre to rim in order to cut with the grain. He gave a good demonstration of how the cup tool is presented with the business end pointing towards 9 o’clock and, with the bevel rubbing, is rotated clockwise until the cut starts and the cutter could be drawn towards the rim of the goblet. With the headstock parallel to the bed, this process takes the handle well across to the other side of the lathe. The demo continued with a pre-shaped block of end grain Kahikatea being mounted, again in 50mm jaws. Bruce prefers to hollow the inside of a goblet first before shaping the outside. This time he bored a centre hole using a spindle gouge (carefully!). Drilling out the centre to guide depth would also be valid. Moving to the outside, there is a choice of shaping tools. Bruce demonstrated both cup tool and bowl gouge, but spindle roughing gouge, spindle gouge, skew and various other derivatives could also have been used. Design points are that the rim should turn slightly inwards for preference, the base should not be too heavy prior to parting off and grooves with burned lines or texturing infill are easy to add decoration.

A totally free form is liberating. This one was clearly designed for the serious drinker. The author has a preference for doing this sort of spindle work using a single, strong spigot at the base end and held in the PG jaws or, with smaller diameter spigots, held in equivalent 35mm or 45mm spigot jaws (also 30mm long), without any reversing. All of these jaws give much better support for aggressive hollowing and external shaping than 50mm jaws – which are limited in spigot length to only 12mm. If there is intention to use, rather than just admire, a wooden goblet – there is need for careful consideration of finish.  Something foodsafe and waterproof like sanding sealer would be a good choice.