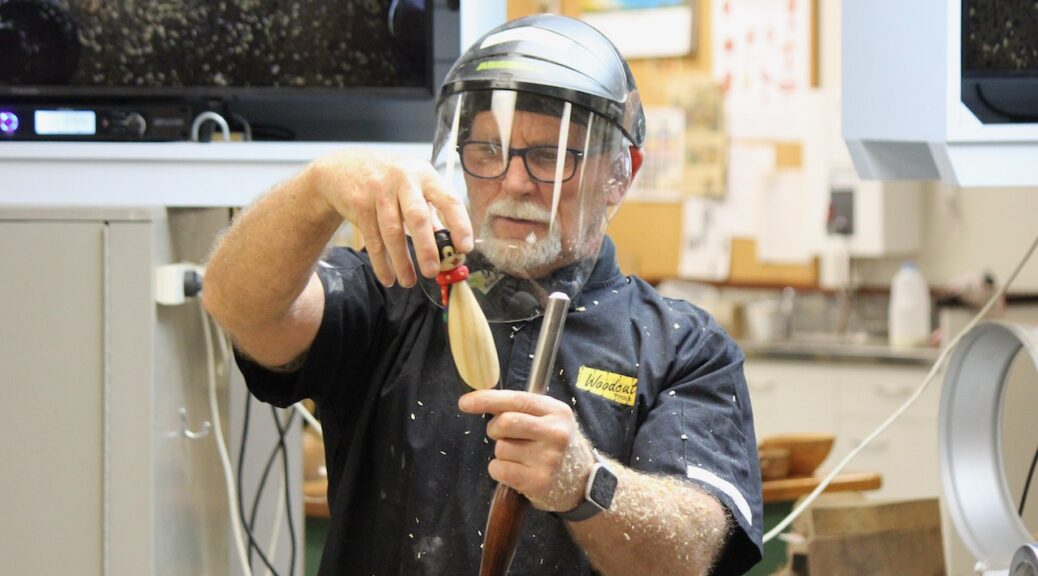 This week’s enjoyable demonstration fit in with the term’s project of children’s toys. Garry Jones showed us to make a set of skittles along with a ball, which after painting make an eye-catching and enjoyable treat for kids.

The skittles – including a soldier, penguins, Superman and regular skittle shape – were made from pallet wood with dimensions 50 x 50 x 210. For new turners’ benefit, Garry showed the various ways to find centre: using a ruler, one’s finger and pencil, or a specialised centre-finder tool, before securing the wood using a step centre. A question from the floor asked whether it could be fitted directly into a standard chuck to which the answer was Yes, though it would be slower to secure and remove each workpiece when turning multiple skittles.

Safety first, of course, and Garry fitted his face guard before using a spindle roughing gouge to turn the piece to round. Pallet wood is generally pine, and though wide-grained Garry remarked that it is possible to achieve a reasonable finish.

Garry had marked plastic squeegee/scraper heads from Bunnings to use as templates for marking the wood with pencil for the various parts (eg. foot, head), of the various figures (eg. soldier, penguin).

First up was the soldier, and Garry started forming the legs using a parting tool, down to 25 mm. A roughing gouge was used for broad curves such as the soldier’s coat and face, before using a detail gouge for the points of transition, such as where the coat meets collar, or face meets hat.

Before parting, Garry sanded with 120, 150 and 240 grit – typically sanding sealer would then be applied. Of note for new turners, is that the foot of the figure should be parted off at an angle so that the bottom of the skittle is concave and thus sits steadily on its rim. At home, Garry would use a Japanese-style pull saw for the final parting – pallet wood is often easier to cut rather than part off.

The second figure was the Christmas penguin and again a scraper template was used to mark out the wood. The Christmas penguin featured more sweeping curves than the soldier, so Garry used the roughing gouge to shape the figure by eye, before using the detail gouge to mark finer details and transitions, particularly around the penguin’s scarf.

Garry then moved to making the ball. For this, he used a piece of 65 mm round timber and marked out three lines 32.5 mm apart – he commented that the centre line should be left visible as long as possible to assist in achieving the circular shape.

He used the roughing gouge to broadly shape each side, then moved to the detail gouge as the diameter decreased and he neared the ends. Terry fetched a milk bottle cap and demonstrated a means of assessing roundness, by looking for light under the cap as it is pressed on the near-round work.

The ends were cut, and Garry then showed the jig he had constructed: a two-sided sphere jam chuck hollowed out with non-slip matting. Garry fit the ball into the jig and pointed out that two lines marked on the two sides of the jig should line up.

New turners may not be familiar with the dangers of using a spindle roughing gouge with a cross-grain piece: note that was one rotates the ball at different angles within the jig, the wood may be cross-grain and so a spindle roughing gouge is not the ideal tool. Garry alternated between a skew and bowl gouge to shape the ball, making small rotations of the ball as he went. There were suggestions from the floor that the jam chucks should be slightly smaller diameters, somewhere around a half of the ball’s desired diameter, to minimise the problems caused by small ridges on the ball. There were also alternative suggestions about how to assess roundness, such as looking down through a round PVC pipe on to the work.

Garry’s demonstration was hugely enjoyable for me as a new turner to watch and it provided a great idea for gifts and toys for the festive season. As Garry commented at the end, “all it needs is paint and imagination”.