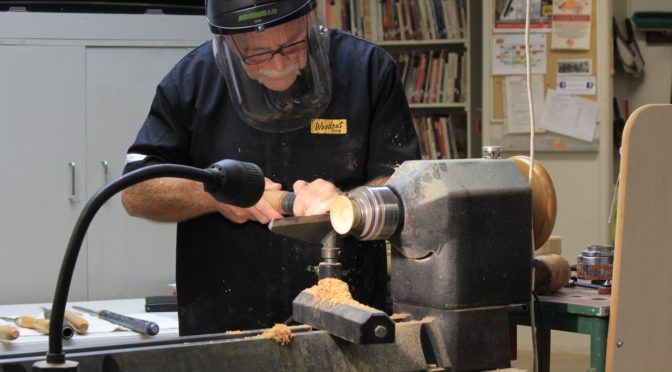 Garry Jones’ version of this term’s “lidded box” theme was a small jewellery box for storing women’s rings (both under and above the lid) with four feet and a finial providing elegance. Garry had brought a number of finished examples illustrating a range of possible designs.

He started with a block of timber 70 x 70 x 150 cm, emphasising that the blank needs to be exactly rectangular so that the feet are equally spaced. On each side of the blank, he had drawn a line 40 cm from one end for the lid, and had marked the centre point of the longer end on each of the four sides. At these points, he had drilled a 40mm hole into each side, meeting in the centre and creating what would eventually become the space between the four feet.

Using a steb centre in the chuck, he created a spigot on each end, remounted the blank with the holes at the headstock end. He marked a line just beyond the holes on the side toward the lid section, to indicate where the bowl shaping would begin. He then turned the lid section to a cylinder and shaped the bowl and feet, with a narrower diameter where the line had been drawn earlier to indicate the base of the bowl.

The next step was to part off the lid section and hollow out the interior of the box. Garry used a Rolly Munro mini-hollower to leave a raised “finger” in the base of the bowl to hold the rings. Garry then faced off and designed the rim of the bowl as for any other lidded box. He left the sanding and finishing to our imaginations (except to suggest that the edges of the holes be smoothed with a flapper wheel in a drill) and parted off the blank, separating it from the spigot at a point that cut into the bottom edge of the pre-drilled holes to separate the four feet.

The next-to-last step was to mount the lid section in the chuck, face it off, and hollow it. (Garry suggested that a dimple could be left in the inside of the lid with texturing applied around it, as he had done in several of the examples of finished ring boxes that were passed around.) He presented the base of the box to the mounted lid several times to ensure a good (and fairly loose) fit, and then completed the outside of the lid, leaving a spigot at the headstock end which could either be turned as the handle for lifting the lid, or as a 10mm (or just under) dowel over which a finial could be glued into place.

The final step is optional. Several of Garry’s examples had a finial on the box 50-80 mm long with an approximately 25mm base, narrowing to 12-15mm at the top, to hold additional rings. If you decide to do this, mount a 40 x 100 mm blank of similar or contrasting wood, drill a hole 10mm in diameter and about 10 mm deep, bring up a live centre in the tailstock, and shape he finial. Finish and part it off, and glue it over the dowel at the top of the lid.