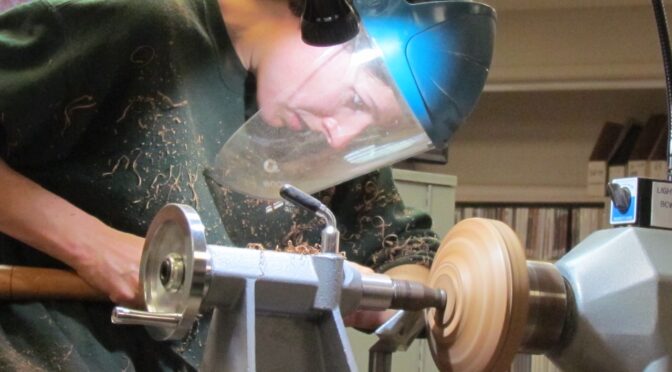 With Christmas approaching, Emma showed us how to make an attractive jewellery stand that would go down well as a festive present. The idea had been sourced from the Internet, and refined. It involved a mixture of faceplate and spindle turning that prompted practice of a range of turning skills and gave additional decorative opportunities; the latter being only limited by personal imagination.

The design involved a cupped base, a central column shaped to a stylised female form, a ‘hat’ with pronounced rim and a finial to finish. This will be written up as a project sheet so I am not cluttering the report with construction detail but will comment on a few notable features.

The demonstration was conducted with careful attention to the accepted safety conventions of turning, eg appropriate lathe speeds, positioning the toolrest with the lathe turned off and restraint of long hair. Where multiple holes were index-drilled to take earrings, the drilling was done prior to final turning of that part so as to achieve clean holes. Both recess and spigot were used to hold cross grain work pieces.

Careful evaluation and refinement of the original design was apparent. Emma had concluded that the diameter of the cupped base should match the length of the column for good proportion and that the hat should be slightly tapered rather than parallel sided. Attention to a seamless join between column and base will facilitate lifting of deposited bangles. The stylised female form can be simply appreciated in silhouette or extravagantly decorated in 1920s flapper style (and anything in between!).

This presentation was an ambitious, calmly-executed and well-received first demonstration by a new turner. It was a credit to Emma and an inspiration to other new turners to do likewise.