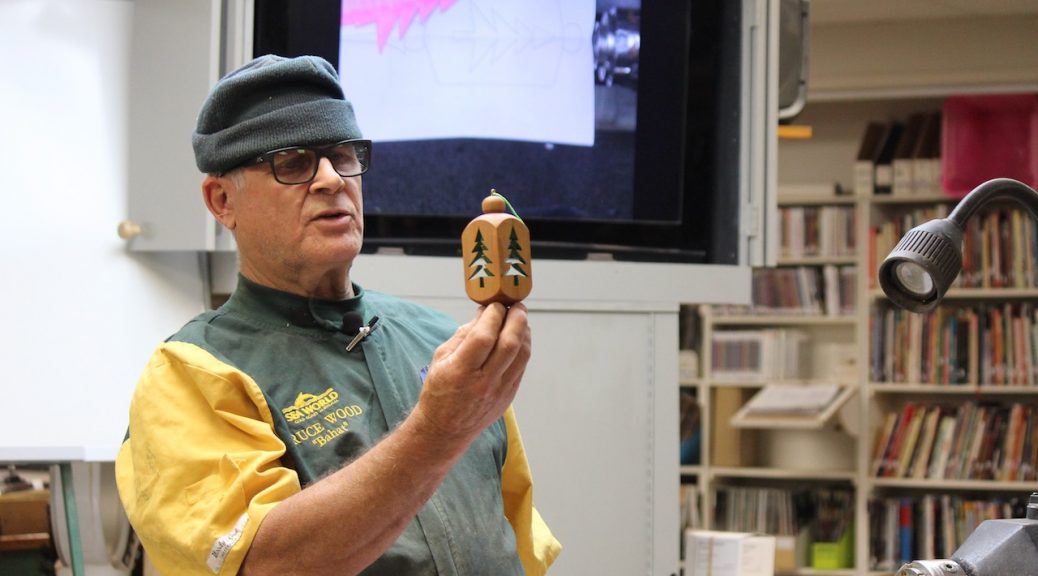 Bruce’s project turned out to be an example of “inside-out” turning. For those, like this reporter, who had often wondered how items were made on a lathe by the “inside-out” process, the mystery was soon revealed. As always, the project begins with a plan, drawn to scale if possible. But in this case the plan was the shape of a Christmas Tree to be worked into two opposing faces of the ornament. Another requirement of good turning is to make templates of the tree branches, this time actual size, so they can be accurately turned as explained in what follows. The stencils are cut from thin aluminium sheet.

The project starts with four blocks 25 mm square by 150 mm long. They need to be carefully sawn as they will be glued together later. Number them 1 to 4 in cyclic order to ensure they are in the right place when finally glued “outside in”. They can be held together temporarily with hot melt glue, but this is not the best system as they won’t pull up tight enough. Better to use hose clamps with rounded wedges to maintain the roundness of the clamps and ensure a tight squeeze on the blocks. Attach them one at each end of the four blocks and tighten. Left-handed Bruce had to contend with the usual banter as he screwed up the clamps and proceeded with more skill than most right-handers. The clamps are located about 10 mm from the end of the block to allow a spigot to be formed for later mounting in a chuck.

The clamped blocks are now marked to show top and bottom and held between steb centres. As a safety lesson Bruce wrapped the clamps in electrical tape to avoid a nasty gash to the hand. (“We don’t want blood on the ceiling”, said one observer. “Takes all the fun out of it”, said another.) The “inside” turning proceeds with the edges of the block being shaped. Now the tree is formed branch by branch, the points marked with the stencils which he previously cut. Bruce used a parting tool and small bowl gouge for this work, constantly checking each of the four or five branches with its appropriate stencil.

Once the branches have been shaped, it is time to form the outside of the ornament, rounding off to the required diameter. During this time an annoying rattle was finally silenced by Dick Veitch who deftly moved the tool table a couple of millimetres from the lathe. (“Was it keeping you awake? Asked one wag.) When this task was finished Bruce applied sanding sealer before removing the piece from the lathe and painting it forest green from a spray can. This, when dry, becomes the inside of the ornament. Apply a second coat when dry and leave overnight before proceeding.

Now the “inside-out” miracle occurs. The blocks are separated and turned round 180 degrees in correct order. Sand off any paint that may have strayed onto the surfaces to be glued. Start by gluing each matching pair of blocks, then glue the pairs together, clamp tightly together again Keep in mind that you want the joints to be so tight that they will not be visible in the finished article. Allow to dry and re-mount the block on the lathe. Mark the position of various enhancements to the top and bottom of the ornament and start turning the outside shape. As with all spindle turning, sharp tools will ensure a nice finish without the need for sanding.

The finished article will be a feature on any Christmas tree and provoke a good deal of conversation about how the tree shape was effected in what amounts to a “box”. Great project for any turner and can be adapted to other kinds of small boxes to add to your repertoire. Many thanks Bruce for another master class and for revealing the mysteries of “inside-out” turning.