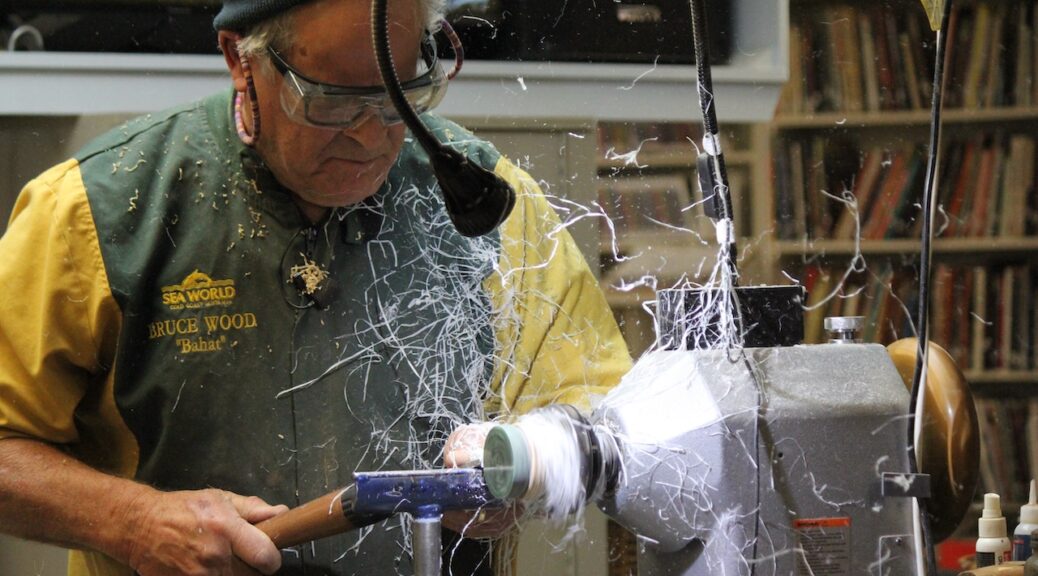 The demo this week is a butterfly box with a domed “greenstone” lid. The greenstone is actually a resin mix of two secret colours with pohutukawa shavings embedded. Bruce relented and advised the colours were yellow and blue but did not give away the shades of colour. The greenstone is an insert in the top of the lid.

Bruce explained that the design of his box had evolved from a taller straight sided box to a shorter, curved edge butterfly box. He showed us previous examples, including one made entirely from “greenstone”, one with a beautiful burl insert, and one with an interesting clear resin magnifying top.

To prepare the resin, Bruce had cut a block of wood with a foot for the chuck, and put pvc tubing around it, in to which he poured the mixed resin and shavings. To make sure there were no bubbles Bruce pressure tanked it, but this step could be eliminated if you do not have a pressure pot.

The box starts with a piece of wood 95 x 95 x 50. Bruce used tawa. After cutting the corners off, it was mounted between centres and turned at 2500 rpm down to 93mm. Bruce cut a spigot, remounted it in the chuck and made a finishing cut.

With the top of the box at this stage being at the tailstock end, Bruce shaped the lid part down to 82mm round and 10mm deep. It was not parted off yet. Using a 50mm forstner bit, and showcasing his fancy digital tailstock depth gadget, Bruce drilled a hole 32 mm deep through the top. Next he opened up the hole to 52mm wide, because it needs to fit the jaws at a later stage in the process. The cut in the lid end needs to be a finishing cut because it can’t be reached later. A quick sand and take the whole piece off the lathe while still on the chuck.

Now take the resin insert piece. This was mounted on a chuck, and Bruce had already polished one side of it to save time. Bruce turned it down to 63mm with a scraper.

Next Bruce put the box piece back on the lathe to turn a recess in the lid to fit the resin insert. He cut the recess 3mm deep. When it was a good fit after test fitting, he gave it a very light sand, sealed the surface and applied CA glue on a paper towel. He polished the parts that would be inaccessible later with EEE.

Put the resin insert, in it’s chuck, in the tailstock. Give the surfaces of the lid where it is to be fitted a final clean, apply medium CA glue to the insert, and bring the tailstock forward until the resin is seated in the lid recess. Give it a squirt of activator, and a tidy up where the insert meets the lid to get rid of any superglue which may be there.

Next step is to part off the lid. Bruce used a thin parting tool, but made the break through cut with a saw. Take the chuck holding the lid out of the tailstock.

Face off the top of the box base piece. The inside of the box needs to be 65mm, so mark it with a caliper. To allow a 3mm upstand, and 20 mm to hold the butterfly, hollow to 65mm wide and 23mm deep. Bruce used a parting tool and finished with a square edge carbide tool. It has felt put in later, so doesn’t need to be a perfect finish. Even so, Bruce gave it a good sand. Then, with a parting tool cutting from the side, he cut a 3mm upstand to take the lid. After putting on sanding sealer, Bruce marked the point where it would be cut off at the bottom. Allowing 5mm for the thickness of the base, the cut off point is 3mm for the upstand, 20 mm depth for the butterfly, and 5mm for the bottom, a total of 28mm from the top. Bruce cut back from the bottom mark, down to just shy of the chuck, then marked the centre of the side and shaped the side round with a spindle gouge, leaving the centre pencil line to be sanded off. He cut it just deep enough to leave a flat next to the upstand for the lid to seat on. Then a quick sand through the grits, and superglue to harden the surface ready for a polish. Apply EEE and Aussie oil, then remove from chuck.

Bruce did not remove the foot from the base as part of the demo, but he explained that he would do this by fitting a piece of pvc pipe inside the box and expanding the jaws of his 50mm chuck in to it.

Put the chuck with the lid in the headstock. Make the lid fit the box. Face off the front, then make a recess, just deep enough to take the upstand. Butterfly boxes do not want a tight fit for the lid. Bruce felt the flat inside the lid looked too big, so he cut a further recess stepping down towards the centre. Remember it still needs to be strong enough to be held in the chuck. Clean any superglue, and give it a sand. As done previously, harden with CA then polish with EEE and finish with Aussie Oil. On the circumference of the lid, mark the centre and round it off as per the base piece. Sand and put on sanding sealer to the outside.

Turn it round in the chuck with a compression hold against the resin. Bring up the tailstock. Next job is to shape the top. Start by removing most of the waste wood at the tailstock, leaving enough to keep it secure. Start to shape the dome. Using a gouge can chip the resin, so when it is near final shape finish with a scraper (skew) to get a smooth finish. When the shape is mostly formed, carefully start to nibble away the rest of the waste wood. The last cut through the top is with a thin parting tool. Withdraw the tailstock, and smooth off the top of the dome, taking care to get a good curve and not a flat. Now with a power sander starting at 150 grit Bruce worked through the grits to 500 and polished with EEE. At this stage the beauty of the greenstone is revealed. Bruce removed the lid from the chuck and fitted the beall wheels to the lathe, charged them, and buffed both the top and bottom of the box. The shine of the greenstone was amazing.

Bruce capped off his excellent demo by producing a larger version of his butterfly box and opening the lid. With a jack in the box surprise a bevy of butterflies flew from the box, a truly fun way to end a superb demo. Woohoo!