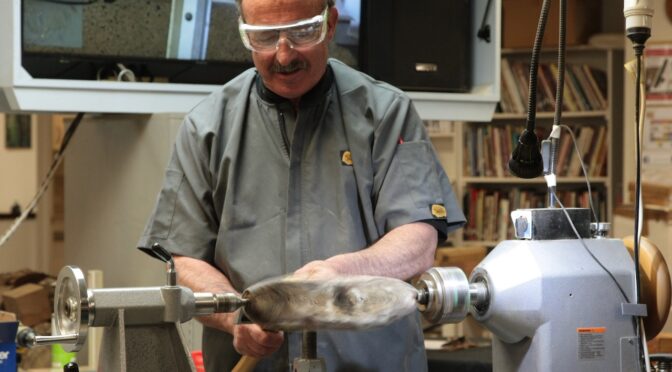 Terry confessed that when asked to do a demo he didn’t have a clue as to what he might do – hence the highly interpretive topic “Things That Go Round”. But to show the truth in this title, Terry took a loaf of bread (thanks for the freebies Anwar), mounted it between centres, set the lathe spinning, and started to turn it with a roughing gouge. Throwing the partly turned loaf into the audience, he began a more realistic start to his demo.

Some time back (eons, I’d say), Terry scored a bunch of kauri offcuts from a job at Auckland Museum. They were varying sizes – 6 x 1s, 4 x 1s etc. What to make with them? Terry’s answer was spoons. He ended up selling about 50 a month through a shop at the airport. The selling price was $48, of which Terry made $26. To make this economically worthwhile, Terry found he had to “pump them out”. Hence this part of his demo about production turning.

The key to production turning is efficiency, and this includes saving time, by using jigs where possible, and doing work which is staged and in batches. For example, with the spoons Terry has a simple jig for marking the centres on the ends of each blank, and he does runs of 20 – 30 at a time. Between centres, and with a tool rest which is the full length of the spoon, Terry quickly turns the handle round, sands it and textures it, framing the textured part with a skew. Part it off and on to the next one. To avoid chattering Terry supports the handle with his non-tool hand. The wings of a spindle roughing gouge can be used like a skew, or a skew can be used to give a smoother finish and minimise sanding.

Next step is to take all the pieces to the bandsaw and shape out the spoon end, then to the disc sander to round them off. Terry finishes with a hand held angle sander at 240 grit before applying food safe beeswax. A little raffia tag to make it look flash for retailing, and another kauri treasure wings its way around the globe.

Terry estimates he has made over 2000 of these spoons. As an interesting side story, a comment from a buyer that she had never seen a left handed spoon before took Terry by surprise, because he had not considered that lefties and righties might stir in different directions, and the angling of the cuts on the spoon could enable opposing stirring directions.

The next part of Terry’s demo featured a lidded salt pig with a spoon. Starting with a macrocarpa cube mounted between spur centres, Terry roughed it round and cut a spigot at one end. He secured the spigot in a chuck and shaped the pig at the headstock end. At the other end he shaped out the lid, leaving a tenon (later to be the handle of the lid) which he would use in an ingenious (so called) time saving way. This will be described shortly. Then he parted off the lid and turned his attention back to the body of the salt pig. First he made a recess into which the lid would fit. Then he partially hollowed it. Next came the fun part. Returning to his earlier theme of production turning, Terry theorised that it was quicker to use a jam chuck to finish the inside of the lid than it was to remount it in a chuck. So using the body of the partially hollowed pig, Terry cut a mortise to fit the tenon he had made on the lid. “I normally get this right first pop” he said. Yeah right. Several attempts later, and after having had the unfinished lid fly off a couple of times, Terry resorted to jamming it in with toilet paper and taping it up with masking tape as an added measure before he was able to finish the job. Needless to say the audience took great delight in bombarding Terry with cheeky comments to which he responded in kind.

At this stage the lid still wasn’t finished because the tenon had to be re-shaped into a handle, so Terry jammed it into the recess in the pig and did that. Back to the pig, and the inside was finished with a hollower. Final finishing was done on the outside before Terry positioned it in the chuck in expansion mode to remove the spigot. The last step is to take it to the belt sander to form a flat on the lower side so it can sit in traditional salt pig fashion, or alternatively it can sit upright on its base. A useful tip is to make the grain sit horizontally because it looks better that way.

The salt spoon can be made entirely from wood with a ball end, but in this case Terry used a kit with a 3mm hole drilled in the handle to hold it. Lastly Terry drills a hole in the side of the lid to accommodate the spoon.

Terry said he gets $48 for his pigs, and his advice to turners is “bash, bash get the cash”. I dunno about that – some are in to production turning, and others are in it for fun and happy with making one off pieces. Whatever. As always Terry, we love your work, thanks for a great demo.