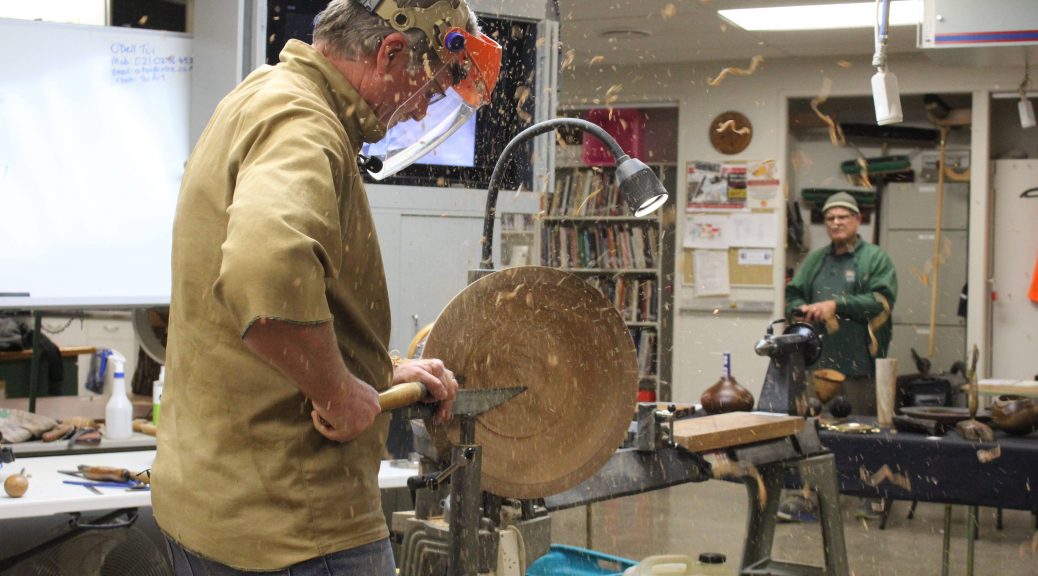 Richard’s night out
A night out with a big bowl, actually a really big green blank. So big that it went to an outrigger set up with the benefit that it provided a good view for the participating audience. A good windup for the crowd as Richard indicated that the shavings will go as far as the third row-or even further.

The location of the lathe was quite important for getting the targets in the audience. The set up with the outrigger provides the audience with a view that they can see what’s happening-or going to happen to them. And, possibly a clear indication that the shavings were coming their way. The bowl was mounted on a large faceplate with a solid array of screws. The blank was about 450 mm in diameter and well deserving been set on outside outrigger with the head angled.

There were many timely reminders of safety and checking throughout this very fun filled demo. Richard reminded everyone that turning the head allowed for a bigger diameter even without the outrigger. That is, he said with a smile, when everything is fixed down. The reminder came on the length of screws for the faceplate. These will loosen in Greenwood as activity progresses. Regular use of long tech screws with hex heads and a faceplate to start with is probably best when starting up. Noting : please don’t use roofing screws. This type of screw acts as a drill and rips the wood out, thus loosening an item fixed to the faceplate.

Step one was simple shaping and tidying up the blank. Initial shape was lathed out and preparations were made for making a spigot. A reminder that newly harvested timbers such as the Elm hold a significant amount of water. As the blank spins , a good spray is given off. However, as the water leaves the timber that slightly loosens on the holdings.

Richard reminder: to check, Check again and tighten all the time. it was noted at this stage that members of the audience had donned helmets and raincoats-particularly those in the front rows.
Spigot: as Richard was using wet wood, there to be a tight even hold. Also, that the spigot depth is not more than 10 mills. Too long and the spigot will bottom out on the chuck and produce a lot of additional chatter and wobble. Several persons mentioned the need to check the type of the wood. Elm has a tendency to warp or move. Hence slightly larger diameter so that the chuck can fit tidily into the spigot.

Faceplate off, the centre dimple made, the 130 mm chuck fixed on, and now the volunteers. A large amount of bowl hollowing was required. The volunteers were offered targets for shavings into the a number of rows.

The volunteers: First up was Dave Gillard hollowing with a tidy swing style. Shifting shavings at a good rate and making third row targets. Terry Scott followed. Noting that Terry’s concern was that the wood smelt like an old armpit. Although from this writer’s view, I thought it was a rather nice description of what the green elm really smelt like. Terry was able to get shavings well up into the third row just about the force. The next was Dick Veitch reminding people on nice sharp tools, a slightly higher speed, and shavings well into the third row. Also, Dick pointed out that the outside edge of a 400 mm diameter bowl was spinning higher speed than the given overall speed of 890 rpm. A good reminder.

Richard came in with finishing and getting the bowl down to a workable and storable thickness of around 45 mm. Noting that to thin and the bowl moves to thick and the bowl cracks. The even thickness gives a better result in regards to warping-particularly if this is a type of wood is inclined to do that. Storing is about 1 to 1 ½ years with standard sealer. Usually Richard puts the date on and sometimes the location of the collection.

Many thanks to Richard and his volunteers for a fun evening and good reminders on wet turning.