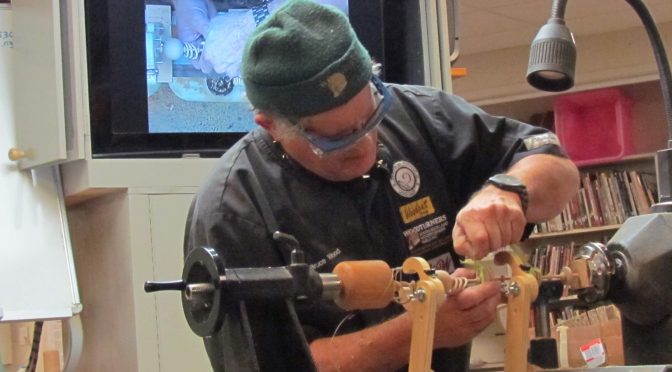 Bruce opened the evening by acknowledging French turner Jean Francois Escoulen who introduced fellow French turner Eli Avisera to the Trembleur. Eli had been the inspiration behind Bruce’s demonstration this evening, Eli was a guest demonstrator at the 2018 New Zealand Symposium. Bruce also acknowledged visitors from the Hamilton club, who had been out shopping all day (woodturning goodies of course). SAWG also enjoyed a full house of members for the evening.

A Trembleur is a long spindle with beads separated by very thin sections. The thin sections must be consistent along the whole length. When done properly, a trembleur is a marvel to observe and play with as it will shake and tremble with the slightest touch.

The lathe was set up with a Oneway Steady and standard chuck. Bruce was using a 400mm length of Kauri 40mmx40mm square. The head fitted in the jaws in it’s square format and the tail stock was brought up. Bruce mounted the steady ready for the next stage – explaining briefly the different designs of steady available and his reasons for choosing the One-way. Quality product with a proven background. Of course a price was bandied around for the Steady with courier postage being the main excuse for the high cost of this investment. Members scrambled for their phones to calculate Canadian dollars to $NZ. The feeling of those attending was that a few more Oneway jigs may be coming this way.

The blank was roughed down at a great speed to 38mm – the square spigot end was marked at the no 1 jaw position so that remounting could be made more accurately. The steady was reset near the tail stock end (not too tight) leaving enough wood (50mm) to form an ‘onion’. Once the onion was finished it was held and packed into the tail stock. Turning at 2000rpm Bruce highlighted his preference to secure a finger under the tool rest which gave much more control when turning intricate pieces. (referred to as Oogeehoogees). The steady is moved along as you go so that the wood is secured as near as possible to the turning area.

The next major step was to turn the thin sections down to 4.2mm, although other completed Trembleurs on show were around 3mm. The larger diameter preferred for demonstration purposes because of the concentration needed for the finer option. The lathe was now running between 1700 and 1800 rpm. With the 4.2mm spindle formed this was followed by a set of captive rings. This got the audience excited as Bruce had completed rings jumping around as he made the next ring. Stressful for everyone present, but Bruce carried on with his very vicious looking homemade hook tool, looking as if it was going to destroy the work at any moment.

Eventually the rings were taped down and the audience relaxed as more baubles, balls and spindle areas were added to the artwork.
Time ticking on, Bruce reverted to an almost completed Trembleur so that he could show the use of his String Steadies. Magical little gadgets that required Sewing Awl waxed nylon string to be wound around the spindle areas in a figure eight configuration. At this point the spindle was remounted matching the no 1 jaw mark at the foot end of the spindle and the onion was held in a shed made large French knitting spool held in the tail stock. This was packed with foam/rubber to hold the onion carefully in place while the stand end was completed. The knitting spool also acted as a String Steady.

Again the stress levels rose within the audience as Bruce started up the lathe with 3 string steadies in action, a few squeaks and groans, but all was well as the Trembleur was added to, moulded, a small wheel formed, another couple of baubles completed and a shaft turned to fit in a pre-turned stand.

Demo completed, spindle intact, and a great evening enjoyed by all. Bruce wound up the evening by selecting a random number on his phone app. which was matched with door entries – yes! number 31 in the door was Cam Cosford who won the turned Trembleur.

Thank you Bruce for a wonderful demonstration – you kept us all sitting on the edge of our seats all night. Your enthusiasm, energy, professionalism and humour made for a great demonstration.