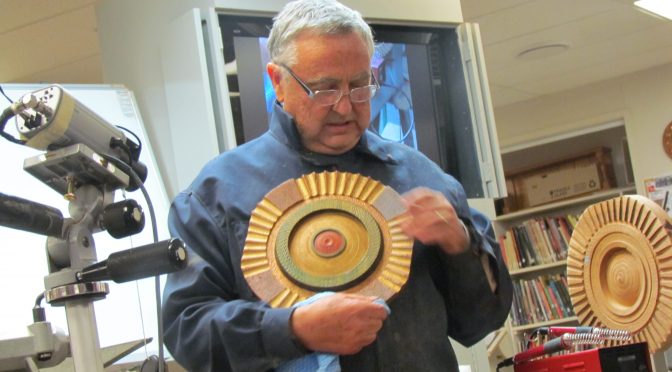 Once again Warwick presented club members with a provocative, interesting and educational demonstration. The demonstration concentrated on “Texture and Colour” using wall plaques as the medium, hence the title Off the Wall.

Warwick had obviously spent a considerable amount of time, imagination and creativity in preparation for the demonstration.

For inspiration in choosing colours, Warwick explained that he would draw on experience, the natural environment such as autumn tones, snorkelling around Pacific islands, Navajo Indian pottery, and poets such as Wordsworth and Coleridge.

To high light what he meant by using the colours inspired by the examples noted above, Warwick displayed several wall plaques he had made. For instance Wordsworth suggested to him streams, daffodils, poppies, and cherry blossoms. From those colours he would pick a theme and colour the plaque to best express what he envisioned. Coleridge on the other hand suggested to him the sun, moon and shimmering; an example of turning inspiration into colour was demonstrated on a wall plaque which was passed around the members. In making his wall plaques, Warwick uses a router for fluting, and various texturing tools e.g. a chatter tool, Terry Scott’s textura, and Robert Sorby texturing tools. He also used a Dremel for texture in the flutes or where ever the texturing tools were not the best option. Pyrography added another dimension with many different textures available. At the conclusion of the demonstration on texturing, Warwick then added colour to his work. He commented that an artist had told him never to scrimp on the quality of brushes he uses, so he doesn’t; he spends a lavish $2.50 for a packet of brushes from the $2 shop. The last of the big spenders!

Thank you Warwick for a very enjoyable and informative demonstration.