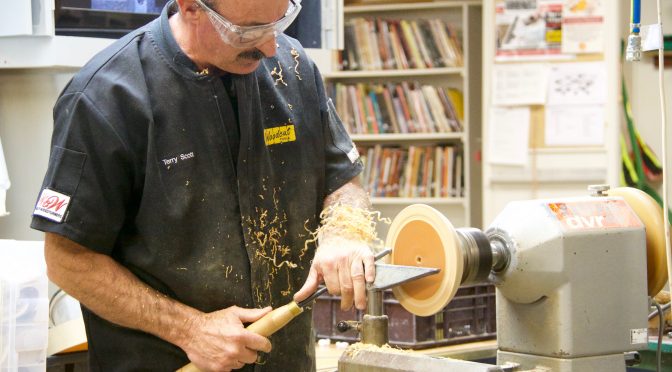 Always expect the unexpected from a Terry Scott presentation, and tonight was no exception. However, if the unusually large audience was expecting a super-thin natural edge bowl, or some exotic texturing or inlay work, they were in for a surprise. Following the term theme of “Brown and Round”, Terry informed us that he was going to take us through the basics of bowl turning. With a large number of new members, many of them beginners, Terry quite correctly estimated that this would be a very acceptable lesson.

WEAR A SAFETY MASK!! Terry reminded even the experienced turners not to rely on safety goggles alone. Eyes are precious and can’t be replaced. Remember, too, that your own kitchen provides a variety of wood-turning supplies and accessories: paper towels, small dishes, brushes, the coffee whisk, various cooking oils, the microwave. But check with the kitchen manager first!!

When everything is set up, always rotate the work by hand to ensure it won’t be striking the tool rest. Check again every time you change the tool rest or make any other adjustments.

Terry uses up to 6 chisels for bowl work, starting with a 30 degree fingernail grind bowl gouge to rough turn the bowl. When asked about speed, Terry advised setting the speed you are comfortable with, from 1,000 to 1,800 rpm. Keep moving the tool rest so it remains as close as possible to the work. Stand in a comfortable position, chisel low and close to the body and RUB THE BEVEL! Don’t “white knuckle” as you proceeed. Let the chisel do its work.
Form a 48 mm spigot to fit snugly in 50mm bowl jaws. Once you have the external shape roughed out, change to a 55 degree bowl gouge to smooth it off and complete the outside of the bowl with a scraper to achieve a smooth surface and avoid too much sanding.

Hold the chisel at a 15 degree angle from the work to achieve a slicing action which avoids tearing the grain. Make slow steady cuts to avoid “chatter” and disastrous dig-ins. The small amount of sanding needed is best done with a right-angle drill (better control) working from 180 to 240 grit sandpaper.

Now remove the bowl from the face plate and mount the spigot firmly in a 50 mm chuck. True up the face (eventual open side of bowl) using a draw cut with a 10 mm bowl gouge. Finish the outer edge and add any texturing at this stage before you start hollowing. The hollowing process begins from the centre hole (made when mounting the blank on the face plate) working from an outer shoulder towards the centre. Work gently — if the chisel gets hot you are pushing too hard. The centre hole is a rough guide to the depth you need to hollow, but use calipers to make sure the bowl sides are even and not too thin.

Keep moving the tool rest to maintain it as close to the inside work face as possible. When cutting near the centre move the chisel round and downwards (not upwards). Use the round edge scraper to finish the inside of bowl, again working from the centre outwards. Sand with a pistol grip drill, 180 to 240 grit, applying sanding sealer between each grit level. Using Ondina oil also assists sanding and it’s “food safe”. Finish with Beall buffing system or your own favourite polishes. Terry ended with a summary of various methods to remove or re-form the spigot foot: the jam chuck, the pressure chuck (jam into another bowl), the Longworth chuck (better than Cole jaws), vacuum chucks and hot melt glue. See the SAWG web site for more information on these holding methods. In spite of the usual banter, jokes, unhelpful comments and rude remarks, Terry kept his cool and delivered a master class from which even the old hands could learn something. Well done Terry!