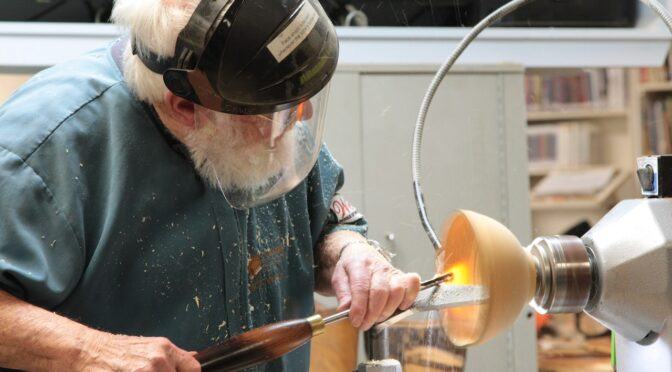 Dick’s mission tonight was to show us the many variations of form and shape that can be turned to meet the definition of “natural”. As per the NAW Art of Wood page, this is “Any single piece of wood, which may be turned on the lathe or shaped with other tools and retains a part of the natural surface of the wood as it was found, or after the bark has fallen off.”

Dick had brought in a large number of natural edge pieces he has turned from wood in varying stages of dryness and from any number of different wood species. These included pohutukawa, olive, apple, pepper, robinia and puriri, the latter being a delight to turn. Shapes included bowls small and large, hollow forms, a lidded box, a winged piece. When questioned, Dick advised that there is no way of pre-determining which types of wood are better at holding their bark during turning, although generally wet wood will retain its bark better. The only issue that can arise from this is that as the wood dries the bark may shrink if it dries at a different rate, causing it to turn over at the edge and present difficulties for final sanding.

Dick has drafted two pages for the SAWG website showing the multitude of natural edge options. These are titled “Natural Edge Options” and “Natural Edge Bowl”. I’m not sure if the webmaster has posted them yet but they’ll go in the Projects section of the web pages.

Using a piece of fig (ficus) to demonstrate, Dick spoke to us about the challenge of deciding what you want to make from your wood. He covered the many options available to the turner for mounting the wood to the lathe. At the end of this Dick put the fig piece on the floor with the pile of turned and semi-turned pieces and a whole lot of logs suitable for natural edge turning, and offered them for free. These were gratefully received by members at the conclusion of the demo, especially some of the newer turners.

For the practical part of his demo, Dick selected a half log of wet olive. With a forstner bit, he had pre-drilled a 40mm wide hole to a depth of 50mm. Dick mounted this on the lathe using a home made pin chuck, and brought up the tailstock. The pin chuck generated a lot of interest from the audience and was passed around for everyone to have a closer look. The project page for the pin chuck will also be posted on the SAWG website.

Having ascertained who was doing the cleanup, Dick then proceeded to spray shavings far and wide as he shaped the underside of his bowl. He put on a spigot, made the base about 1/3rd of the bowl diameter, and shaped a curve which would give the bowl lift off the table. Care needs to be taken not to dislodge any bark during this process, so cuts made from the bottom should not extend all the way to the top. Using a very sharp chisel, and with delicate cuts because the fibres are unsupported, make the finishing cuts from the top down and blend them in to the existing cuts. Next Dick turned the piece on the lathe, mounting the spigot in the chuck. He partially hollowed the inside, leaving a central core for stability. He stopped hollowing at the point where the 35 degree chisel began to chatter as it came off the bevel.

Now comes the interesting part. Dick wants to thin turn this bowl, so starting at the rim he will cut down step by step. Placing the work light close to the outside of the bowl, Dick began turning down until the light showed brightly on the inside. He was at a wall thickness of approx 4mm to achieve this transparency. Working his way down towards the bottom of the bowl, he gauged his thickness by maintaining an even brightness of the light as it shone through the bowl wall. Dick double checked his thickness (or thinness) using digital calipers for a more precise measurement. Dick switched to a 55 degree bowl gouge to finish with a nice curve on the bottom.

To complete the bowl Dick needed to remove the tenon and cut the feet. He used a reverse adaptor to turn it around and bring it up on a vacuum chuck. Inside the vacuum chuck he taped an LED light so he could see the thickness as he finished the base. The issue that potentially arises at this point in the process is that the thin turned wet wood can be porous and therefore the vacuum suction may not be sufficient to hold the piece strongly. Dick brought up the tailstock again, with a small live spur drive, just to play it safe. He cut away the tenon, and shaped the bottom so that it formed a continuous curve with the sides. The lift created earlier needs to be enough to ensure only the feet touch the table, and not the bottom part of the curve of the bowl. Dick checked his curve with a profile gauge.

The position for the three feet were marked out at intervals of 8 notches on the indexing plate and cut using an arbortec carver fitted with a hedgehog ball gouge. Dick noted that the lathe should be locked and the tool held in two hands for safety reasons. With the feet shaped out, withdraw the tailstock and gently nibble away the remaining nub from the tenon.

Wrap the bowl in one or two sheets of newspaper and store it for drying. It will lose weight as it dries, and it is dry once the weight is stable. Now it can be sanded. This can be tedious, but Dick uses a power sander. To do the inside he holds a block of wood in the vice, pads it with a folded towel, and places the bowl over the top of it. The outside is sanded against a folded towel laid on the benchtop.

Thanks Dick, for a comprehensive and most interesting demo on the limitless options for natural edge turnings. I don’t know why he titled the demo “Rough As”, because it was anything but. How was that cleanup Denise?