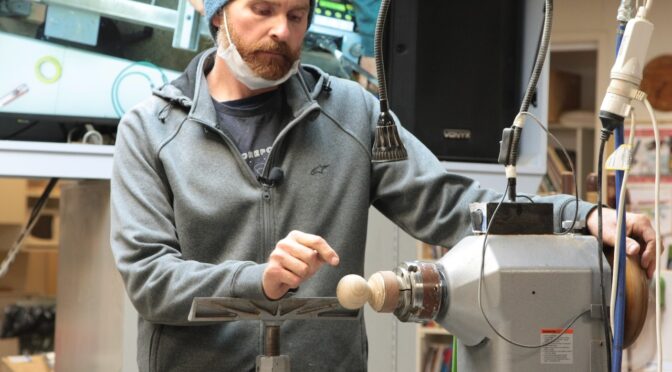 Dave is a fairly tall guy – I dunno, about 6’2” I suppose. Anyway, to set the lathe up at a suitable height he has elevated it on two stands, each with wheels, that go under the legs. He begins his demo by taking a pre-cut sphere, still on a spigot at one end, and mounts it in the chuck. He then proceeds to burn two lines around the circumference of the sphere with a wire. “That’s all the turning we’re going to do tonight” he announces. And the heavy lathe, on its tiny wheels, gets pushed out of the way. Seems like a lot of trouble setting up for such a short display of turning.

To be fair, he did also use the lathe for one other thing – to show us how to use a stanley knife to cut a roll of masking tape in to thin strips by mounting it on the lathe and using the stanley knife like a parting tool. But that’s not woodturning is it? More like Here’s a Hint or Over the Teacups, that they used to have in the Women’s Weekly back in the day, before there were computers.

Next he pulled up a table cluttered with all sorts of paraphernalia and sat himself down behind the table. Using a moderately impolite phrase, Dave said “tonight we’re going to burn the snot out of some wood”. The topic for the night is burning (pyrography) and colouring. Now a confession from me – I rather wish someone else was doing the report tonight, because I know next to nothing about pyrography, and am completely unfamiliar with the tools and terms of the art. Nevertheless, at the end of the demo I approached Dave and said, “Man, I’m really impressed with the precision and detail of your work, I could never do anything like that.” His response was “I could sit down with you for 10 minutes and at the end I could have you doing work like this.” I guess he’s saying it’s not that hard, give it a go.

Before he started Dave unleashed a monster of a tool that was so long it would barely fit in some turners’ workshops. This was the new Rolly Munro hollowing tool. In case you didn’t know, Dave is an agent for the Rolly Munro line of tools (always an opportunity to get a plug in). Dave explained that there is a formula to define the depth capabilities of a hollowing tool. If you take the diameter of the shaft, multiply it by two, and put a zero on the end, that is the capability of the hollowing depth. For the tool he was showing, the hollowing depth was about 460mm, which coincidentally fairly well matches its price.

But back to the demo. The first thing to think about is what pattern you wish to create, and setting it out on the workpiece. It’s no use starting out without a design in mind, and just doing random burning. The two horizontal lines that Dave had burned around the sphere with wire served two purposes – they defined parts of the boundaries of the segments in which Dave would burn his patterns, and they also created an edge which would act like a barrier to stop burns “running” along the wood fibres and across into the next segment. Using the indexing on the lathe, Dave had already marked equal points on his sphere, and now he ran thin strips of masking tape diagonally from point to point, along which he burned lines, effectively dividing the sphere into a number of equal triangle-like segments.

With the basic outline for the pattern defined, each of the segments can now be filled in. Using different tips, and sometimes this way, sometimes that way, but always to an ordered pattern, the burning is continued until the whole piece is blackened.

Dave used a Robbie Graham machine which apparently is capable of very high heats and has a quick heat up time. It has air cooling to keep the pen temperature down. Having never seen this type of work done before, I was surprised at the apparent ferocity of it. The tip glowed red hot, and each time it was applied to the wood there was an instant burst of flame and smoke. Dave had a desk fan running to expel the smoke away from the audience. I heard the term “branding” used in relation to this work, and I can sort of see why, but I can’t say specifically whether that is a particular type of pyro work or just a general term.

It would be fair to say that the demo was accompanied by a high amount of banter from Dave and an equally high amount of stirring by the very receptive club members. A video recording of the demo was being made, and Dave confessed he was glad to be able to edit the video to his own satisfaction.

Next was a demonstration of how Dave creates the flame pattern which he uses on his pepper mills. He uses the pin stripe masking tape which he has cut to define the gentle curve of the flames outline. This sounds like a simple artistic manoeuvre but is actually an awkward contortion of knees and hands to hold and shape the tape into a sweeping curve. Using a blade tip, and starting at the narrow top, Dave begins to burn by rolling rather than plunging the blade in to the wood. He uses the tape like a fence, and rests the tip of the blade on the shoulder of the tape as he continues to burn the outline of the flame. A further purpose of the masking tape is that it also serves as a template and a barrier when it comes time to colour the design. Dave uses a pillow slip filled with rice as a working surface to rest his workpiece on.

With pyrography, of course safety is paramount. If Dave needs a break and a cuppa, he turns his equipment off, unplugs it, does a visual inspection of his work piece and his work area for charred embers etc, and then waits ten minutes before leaving the room.

Dave showed us some examples of how to do repair work so that the repairs are least visible in the finished work. In making pepper mills and other items, there are frequently nail holes or other faults in the wood. It is preferable to repair the hole while the wood is still not fully turned, and use sanding sealer before applying glue. Sanding sealer and/or CA glue can create impervious finishes which appear as blemishes under the final finish. The three repair options Dave described were drilling out a nail hole and using a dowel plug, superglue and wood dust, and a wood filler. The dowel plug option was frequently the superior option.

Once burned, the work can be coloured. Dave uses airbrush paint to which he adds just the right amount of mica powder. Too much, and you lose the lovely pearlescent effect created by the powders. Brush the wood with a toothbrush or similar brush, or give it a burst with an air gun to remove any ash dust left over from the burning. When painting Dave described a motion in which he sweeps his paint brush from one edge of the burn mark down and upwards, always working in the one direction, so the shimmer of the metal powders is not erased. It is hard to describe in words, but those of you who have looked at his delicate painted art will know what I mean. Dave told us that colour combinations of three work best, and we should always use complementary colours from the colour wheel.

For further paint effects, Dave showed us how to use an embossed paper towel to daub on paint in a way which was random but also structured because of the reappearing sameness of the embossed pattern. Different household items can be used to create paint effects, and it is worth experimenting with as many as possible to achieve different results. For example, a mandarin bag stretched tight over the wood and then painted over will give a diamond-like effect. Give it a go.

Dave stressed to us that it is important to be comfy when doing this type of work, and a tool that he finds invaluable is the Woodcut Pro-mount which can hold the workpiece in any variety of positions to achieve a comfortable working position.

Thanks a heap Dave for an illuminating demo which will inspire us to extend our skills into this fine branch of art. I can’t wait to view the finished video and see how much of the stirring you leave in.