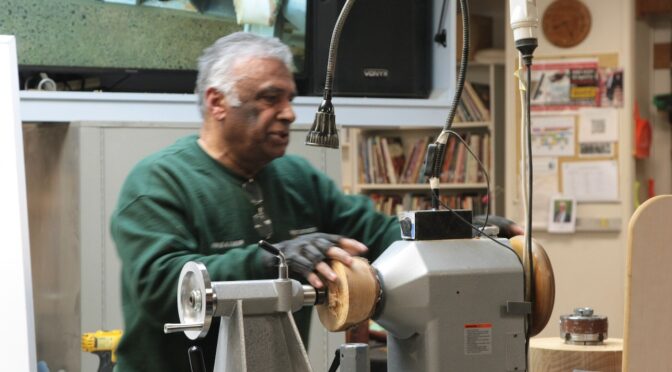 The demonstration was part of the terms natural edge projects and Anwar talked about the various ways you can mount your wood to achieve the natural edge by using long grain and cross grain,the tools that we can be used to achieve a satisfactory result. He took us back to the beginnings of his Woodturning learning and reinforced what are the key elements of making a well finished product.

He showed us various various examples of what he had achieved over the period using natural edges. Those shown were dependent on the wood choice and some of it was dependent on the objective of achieving a vase or a dish. Regardless of the experience, of those present, all of the points were well made and reinforced need to think through what you were doing to achieve your objective and deciding on what tool to use and when.

Having reinforced all the points that we should remember and practice when turning he then gave us the process by which you can achieve a balanced edge, that is the width of edge when the piece of wood has two high and two low sides, as we do when turning a half round cut from a branch or the trunk.

Anwar then demonstrated turning a dish/bowl and was started by turning cross grain between centres. A forstner bit had been drilled into the centre of the grain side and opposite side to enable the location of the live and drive centres. The inside of the bowl was cut to just below the bark and the piece remounted between centres.