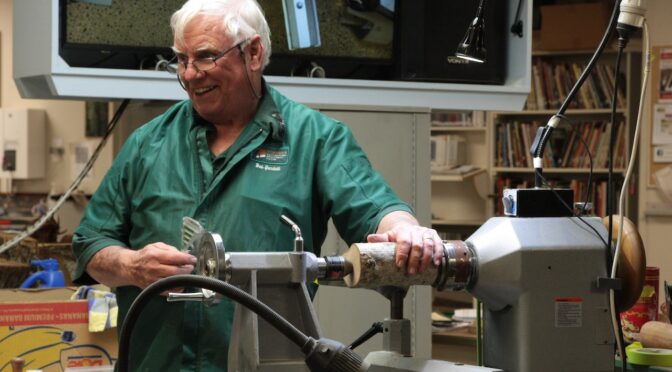 The theme for this term is “Natural”, and this meeting marked the first club night for the term. Accordingly, Bob chose a naturally themed item to turn for the enjoyment of members.

Bob encouraged members to turn to nature as an inspiration for woodturned art.

A seed pod from an unknown tree triggered his idea to turn a piece in which the original shape of the blank is retained in its natural form, but the piece is turned in such a way that the form of the object is silhouetted within the piece.

Before picking up a chisel, Bob used a profile gauge to outline the shape of his hidden object, in this case a bud vase, and transferred it to graph paper. From here he was able to translate the dimensions to suit his blank piece of wood. The wood he chose was a branch (possibly camellia?) about 200mm long and 90mm diameter. To simplify his turning, Bob transcribed the depth measurement of his cuts on to a length of masking tape which he stuck to the tool rest.

Bob had pre-turned the spigot on his blank, and he fitted it in the chuck. With an engineer’s twist drill (one with a morse taper which eliminated the need to use a Jacobs chuck), he commenced to drill a 20mm (approx.) hole into the centre of his blank.

Starting at the tailstock end (the top of the vase), and using only a parting tool, Bob made a cut to the depth of his first measurement. Next he took a narrow strip of masking tape (approx. 6mm) and wound it around the blank beneath his first cut. This it to delineate where he will make his next cut. Then he made his second cut to the next measurement on the masking tape on the tool rest. More masking tape, another cut to the next measurement, more masking tape, next cut, and so on, until the shape of the hidden vase is fully profiled within the length of the branch. Initially Bob checked the depth of his cut with calipers, but as the form of his piece took shape he was able to eyeball the depth of the cuts. Each cut was refined so that rather than having a square edge it was angled towards the next cut to create a continuous line.

To make the outline of the bud vase stand out more within the natural form of the blank timber, Bob took a small paintbrush and with a dark coloured acrylic paint he coloured the interior face of each of his cuts. To flash it up from a weed pot to a bud vase a glass tube can be inserted in the drilled centre hole.

The demonstration was a lively affair with considerable audience participation, and our thanks go out to Bob for kicking the term off with such an entertaining demo.