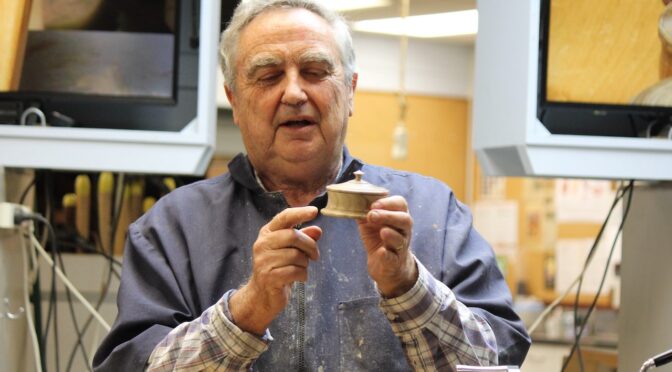 As a prelude, Warwick started by displaying some small, elegant boxes he had picked up on his travels, as well as some of his own creation. Elements of good design and embellishment were pointed out.

A dry piece of Plum was to be turned into a Butterfly box. The blank (already roughed shaped) was mounted it in a 35mm chuck.

After making it round with the roughing gouge, the bottom of the box and the lid were marked out with pencil.

A beading tool was used to make a bead on the bottom of the box.
As a tip, material on either side of the bead can be removed with a spindle gouge to aid the beading tool and prevent tear out.

Bruce Wood suggested marking the bead with a pencil, to prevent digging the beading tool in too far.

Another bead was made at the base of the lid.
This was made with the parting tool (to mark the bottom of the lid), and the spindle gouge (to create the bead itself).

The lid was parted off with a thin parting tool, rubbing the bevel.

The outside of the box was then turned to its final shape, textured and guilders paste applied for effect. The paste would be left to dry before sanding most of it off later.

The inside of the box would now be hollowed.

A parting tool was used to mark the inside edge of the box and to create a shoulder. The bowl gouge was then used to removed the bulk of the inside.

To square out the bottom, a square edged scraper was used to gently remove the inside curve.

If you’re getting tear out, sanding sealer and repeated thin layers of superglue are recommended to harden the wood fibres.

Following this, Warwick would normally sand the inside, use EEE, followed by Shellawax.

To remove the spigot, the bottom is turned around and mounted in Cole jaws.

Masking tape is first wrapped around the box, to create a flat surface for the jaws to firmly grasp.

For extra security, a hot glue gun was used to glue the piece straight onto the Cole jaws. Some club members were highly skeptical at this extra step, but Warwick was steadfast in his defense!

With the box securely mounted, the bottom was tidied up with a light touch of his spindle gouge (at a speed of no more than 600 revs.)

As an added bonus, Warwick gave us a quick flocking demo using a flocking kit.

To apply the flocking, first a thin layer of PVA was spread on the bottom and sides of the box.

A flocking pump was then used to puff the flocking into place.

That capped off another excellent and insightful demo from Warwick.