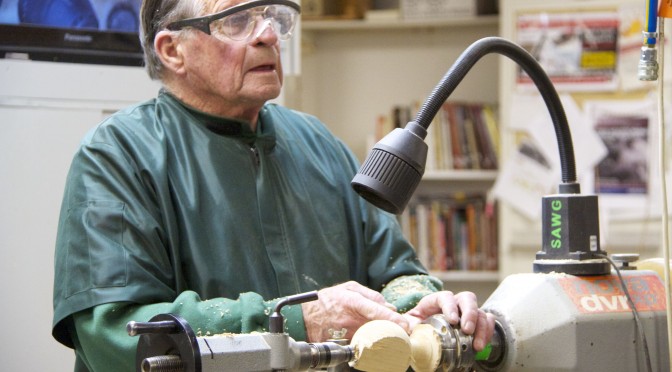 Does three go into one….yes as demonstrated by Colin Wise

In the interests of a constrained time frame Colin elected to use less than suitable timber (too soft) in order to demonstrate the stage by stage process involved in turning this rather delicately trumpet fluted three neck vase.

Colin explained that in essence, you create three separate vases however a bonus would be in remembering ones school days geometry. It is critical at the starting point that the joining angle of 120 degrees is established and that the correct offset is marked..e.g. 16 degrees on the bottom (tailstock), 42 degrees at the top (headstock) which equates to a 15 degree offset over the 130 mm length. What was also demonstrated by Collin was his use of an ingenious wooden chuck shaped to hold the vase for both turning and shaping the trumpet plus hollowing out the vase. This chuck (attached to a set of cole jaws) piece of apparatus was the culmination of about two days work but once made would allow for multiple replication. Collin made use of his sphere turning setup to show how the perfect sphere can be produced in spite of working with soft  timber.

This stage by stage demonstration by Collin Wise showed that with patience what appears to be magic could, with care, be a reality for wood turners with some experience. A full diagrammatic description can be found on www.woodworkersinstitute.com (ed: not sure where)