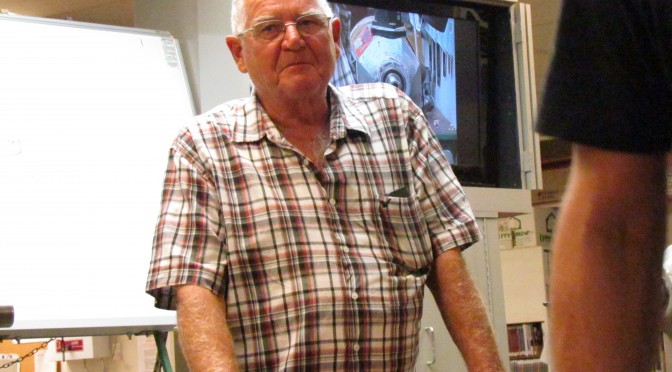 Dave gave the members an insight as to his past advising the members that he was born in the UK, trained in the UK as an Engineer working in metal. Emigrated to NZ 49 years and 11 months ago on a 2 year contract. He was inspired to start woodturning by his father. Dave was a founder member of Franklin Woodturners Club at Waiuku. Dave’s dad worked at the mill for 17 years and Dave beat him in service with 30 years. Dave made his first segmented turning at the club in Waiuku, it took 3 months to complete, and he was advised to put a high price on it.
Dave handed out a segmented bowl to be passed around the audience. This bowl has over 300 pieces, the main ring has 10 elements to each segment, and Dave made another 4 bowls to the same pattern.
Dave gave out the following tips at this stage for advice:
Work out pattern to start with.
The books on segmented turning are generally very old, the glue used in the old days was made from boiling up horns, hair and hoofs in cast iron glue kettles, this glue has long setting times, the work probably was clamped with a hose clip, Dave subsequently used a yellow glue from Carbatec, now he uses a white exterior grade glue which grips faster, within half an hour he can machine it and being exterior it can go out in the rain. The segments are now clamped with elastic bands, more pressure will only squeeze out and waste the glue.
Use a jig (shown) or toggle clamps to hold segments for cutting with a drop saw or table saw, remember to remove any burrs.
All segments are cut with the drop saw and NOT sanded as the sanding creates ‘curved’ pieces.

Dave was asked to make a rolling pin with segmented wood in a spiral form. It took 972 pieces, when the woman asked for another one similar he refused. Now he makes rolling pins with a slightly less onerous formation. Dave uses jigs to hold the segments together whilst assembling them on a flat surface.
Years ago Tecknatool made a device called an “Ornamental Turner”, which was sold by Carbatec. Now no longer available except at a high price on the internet.
Dave’s Missus gave permission for Dave to purchase something nice when he got out of hospital, so he purchased his device, he has subsequently added a toolbox to hold his cutters. The toolbox was made by Dave during his time at the machine shop. The ornamental turner ensures that his built up work will be parallel to the previous segment. Using the ornamental turner with the toolbox and homemade cutters Dave confirms that he does not have “dig ins” and the set-up is good for repetition work, he makes 50 wig stands at a time. Note the soft jaws made by Dave holding segmented work ready to be machined flat.
Dave passed around a bowl with 182 pieces measuring approx. 120mm diameter, wood is Rata and Kaikatea. Another tip to manufacture thin strips of wood (approx. 2mm thick) to look like a feather, take a thicker piece of scrap wood and thickness it then glue on your good wood, saw with a table saw to give say 3mm thick and then thickness to 2mm, add another good wood strip to the previous thin strip and continue in this fashion to however many strips you want. You can now use them in segmented work.
Dave’s demo was well received