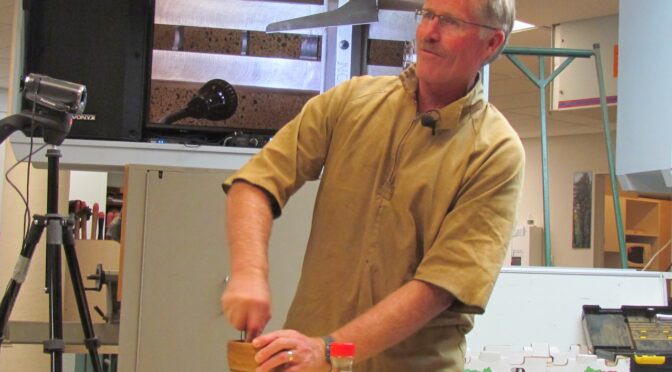 Richard began the demo with an engaging walk down memory lane and telling us a story involving his school days gun powder and the consequences that go with being caught.

Begin with a 125mm cube. On his occasion Richard used a piece of Jacaranda he was given by Dick a number of years ago. Mount between centres (steb) and turn the outside round. Turn the outside by working the chisel both right and left handed.

Turn a chuck bite on the tailstock end, in this case 58mm, to match the chuck used.

Take the block out of the lathe and turn it around. Remount in the chuck using the centre mark made by the steb centre to align with the tailstock.

Turn outside of the Mortar, make the base as wide as possible for stability – shape the outside slightly. Sand and a finish the outside. Use texturing tool etc for personal preference.

Hollow centre out using a bowl gouge. Hollow the top using 35 degree and finish curve at the bottom using a 55 degree gouge – speed around 1260 rpm.

Round inside and outside lip. To remove the bottom use a face plate with foam on it using the tailstock and centre to remount the work.

Nibble the foot off the bottom of the mortar turn down until you have only the centre left. Before removing the last of the foot sand to an acceptable finish and add any embellishment. Cut as much of the remaining foot off then use the sander to take the last part off and then go through the different grades of sandpaper. Remember to slightly undercut the face where the chuck bite was to help with finishing the bottom.

Mount a 40mm square blank approx. 220mm long turn round using a spindle gouge. Turn the pestle to the desired shape. Turn the ends down and shape then to the final design part off one end and sand then remove the other end and hand sand this to an acceptable finish.

Thank you Richard. Well done on an entertaining and most enjoyable demo.