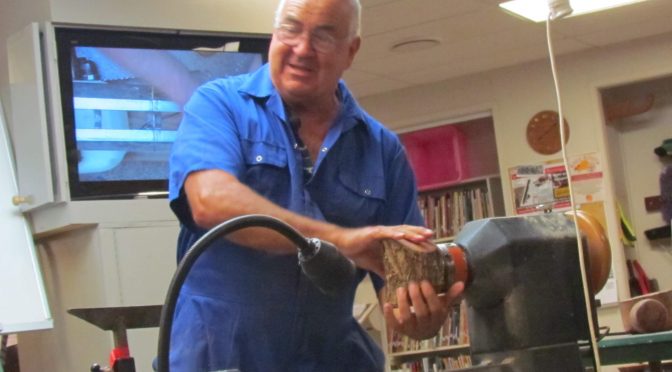 This was a brilliant presentation from a very well recognised woodturner. Peter had travelled down from Kerikeri and met up with his old colleague Ian Fish to present to the South Auckland Woodturners Guild. The many members in attendance must surely have reflected on a great deal of the experiences and words of caution outlined by Peter in their own woodturning ventures. Peter opened his presentation by sharing his own introduction to woodturning and was once a member of our Guild.

The most problem once you start to turn wood it that it is:

Where do you find it?
A Chainsaw really makes life easy, but it’s a dangerous tool.
Aspects of Safety where discussed – a wonderful log support frame was on display for members, this would handle most log sizes used by members. A couple of fence battens and a half round post cut in half is all that was needed to build this jig. A must have.

The chainsaw settings: Teeth at 30 degrees for cross cut, and along grain cutting.
Teeth need to be set at 90 degrees for end grain.
Obviously a selection of chains would be required to accommodate both methods of cutting.
Peter produced his favourite Makita electric chainsaw, noting that his wish list was for a battery powered model. Bantering from Dick Veitch on the pros and cons of battery powered saws, suggesting that Peter should settle for nothing less than the latest Stihl.

There’s an unlimited supply of green wood. The size of bowls is not limited by standard stock sizes available from a wood yard, but only limited by the time available to go wood hunting. Collecting is exciting as you never know what you will find. Turning green wood is easier than dry. Pururi or gum is a nightmare to turn dry.

Transporting: You need to cut your bounty into manageable sizes. Probably 4ft lengths will fit across most trailers, without too much effort in loading. A great explanation and diagram showed members how to load large logs onto a trailer. The system was based on leverage with a long rope fixed at the front of the trailer and trailed to the back, slid underneath the log and back around the tow bar. Two 4×2 boards were used as a ramp. The rope was then attached to another vehicle which pulled very slowly while the log was rolled up onto the trailer deck. A very descriptive explanation of the trip home had members in awe of such a successful wood hunt. We were reminded to seal the ends of the logs to control moisture loss. Peter’s theory of cutting 4 foot long logs was that there was usually some good non split wood in the middle.

How to form the blank: Depending on log size, this will dictate on whether the log is just split or slabbed.
It’s easier to start off with a basically round shape before you put it on the lathe. Peter demonstrated the safe way of holding and cutting wood on the band saw, and the importance of stability of the log being cut. Peter explained that he always used disk templates from 125mm to 400mm in diameter. A blank that had been cut to a handy template size was tabled as an exhibit, along with the waste wood.
A thin disk of wood was presented showing where to take various bowl blanks from in order to avoid the pith. The pith is the soft centre of the log. After all it’s the pith that pithes you off!!

The easiest bowls to cut are from side grain. Green timber is usually sought for making bowl blanks.

Points to remember were

Considerations>Bowl shape: Peter explained the Catenary curve – using a string of beads or a light chain he demonstrated the various curves than can be created – curves that were pleasing to the eye!
However, it was important to establish designs and features that defined the turner and ultimately created work that is unique. There always had to be a connection between the bowl and the foot, and this aspect could not be ignored. The foot should always be in balance with the piece.

Ready to make your bowl
How to use a gouge – Your tools must be sharp.
Theories on gouge sharpening, bevel angles, jigs to assist with maintaining the correct angles, along with an overview of the wide variety of gouge bevels used nationwide. Northland use a 55degree bowl gouge with swept back wings at 35degrees, whereas South Auckland mainly prefer the 35 degree gouge for general turning and a 55 degree gouge for refining the inside of bowls. Preference is something that comes with experience.

Once the gouge is sharpened it can be used for any one of four things.

When using gouges and doing the push and pull cuts, most catches come from allowing the gouge to cut while not being supported by the bevel. Without bevel support, the cut will dig in violently in a split second. Big chunks of wood are ripped away. The bevel prevents the gouge from cutting too aggressively—it is a controlling factor. Peter guided the gouge tip with his thumb when entering a starting cut on the inside of a bowl.

Attaching the wood to the lathe: another moment of interjection – this time from Bruce Wood who was determined to show Pete his method of fitting the screw chuck in the Nova chuck. However persistent Bruce was, Pete reverted to his presentation plan. This was a period of light hearted banter and laughter.

The faceplate was the preferred option for most mounting over 150mm.
Grain – an excellent example of grain direction and the cutting process was presented with the following diagram being most helpful to newer members

Turning:
Mounting the round– bring up the tail stock whenever possible.
Form the outside of the bowl first
Let the grain govern the direction of the cut.
Feet positioning: Place your left foot first in the finishing position then the right foot at the start of the cut.
Swing from the hips, which is not so easy when on the inside of the bowl.

Roughing: start from the tailstock centre and work the shape. Can use either a push cut or a pull cut.
Always rub (kiss) the bevel using a push cut. This steadies the gouge. Because you are pushing the tools and it wants to buckle, it can’t so it either digs in or scoots away.

Finishing a bowl blank after it has been dried:
The blank will probably be out of round after drying. So mount the bowl so that the chuck bite can be trued up by positioning the foot towards the tailstock.

There are a number of ways you can hold the bowl in this position. Cole Jaws chucks are easy to use, but keep the speed down and bring up the tail stock before starting the lathe. Similarly, if you are using a vacuum chuck, check for cracks in the wood, anywhere air can escape or OUCH – your bowl takes off into orbit. It is important to see that the bowl is seated properly too. If you don’t have access to this equipment, use a compression chuck. You can make one yourself – a simple rounded jig not unlike a darning mushroom, costs nothing and is very useful. Use a piece of thin rubberised matting (probably a bit in the cutlery drawer) over the compression chuck and fit carefully into the bowl. Centre with your tail stock (having marked the spot during roughing out).

Once the bowl is turned to your satisfaction, sand through all the grits using a power sanding system. This will leave you with an amazing surface. Now it’s time to apply the finish and see your creation come to life.

Peter was very particular with his sealing and waxing, leaving the product to dry before wiping the excess off and rubbing the compound into the grain. Peter used toilet paper as his preferred application material.

Other clothes were not recommended because they left lint which often caught on the cut grain.

This was an excellent presentation by a world class wood turner, and we as a club are very privileged
to have shared in Peter’s life-long learning experiences.

Having written this review, I must thank Peter for sending me his notes, because the majority of this report is taken from the raw material provided.

Important – Don’t forget to have a cuppa at and during each stage!!