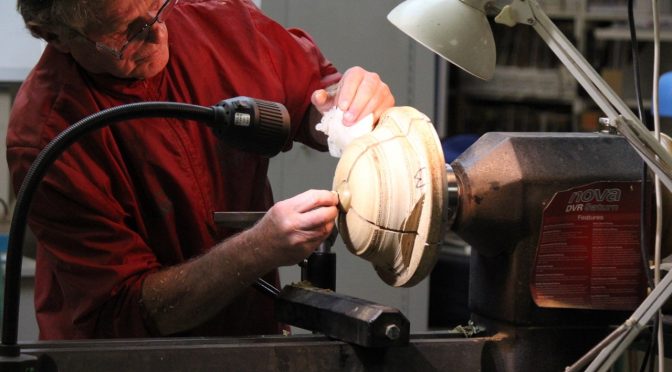 This Wednesday we had demonstrator John Basillie from Franklin show us how to make small wooden owls. John has been woodturning at Franklin for 6-7 years and Wednesday was his second visit to SAWG. It was a very interesting and intricate demo which provided some tips (and some longcuts) for turners of all skill levels!

Making the pupils:
John started out by making the pupils for the owl out of black rata which provided a nice contrast to the iris. Using a skew, he turned the pupil to a 10mm diameter with the help of a template. He then used a modified hacksaw blade to part the pupil off. John has found it easier if the pupils are made one at a time.

Making the eye:
John then proceeded to make the eye, he firstly drilled the hole for the pupil with a 10mm forstner bit and then the pupil was pushed in and glued, the eye was then turned down to 19mm in total.

The Body:
The body for the owl was made out of a 55x85mm block of Swamp Kauri which was turned parallel to 48mm in diameter with the help of groves cut periodically along the block. The block also had a 20mm spigot which would be the base of the owl.
Next John divided the block into 4 by drawing lines 12mm wide. These were used as guides to create a sphere.
Firstly, he cut from the end of the block and the first 12mm line on the block. He the cut from the centre line to the end of the block. 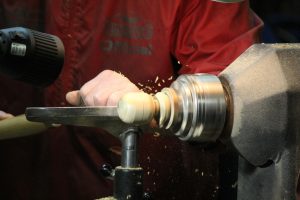 Despite the decent sphere which was produced Johns ended up adopting the quote “What you lack in skill you make up with a bit of brute force and sandpaper” and he proceeded to grind the ‘sphere’ down to a sphere using a cut steel pipe, it was then finished off with ondina oil and sand paper.

Finishing the body:
Using a reverse chuck John put the body of the owl on the tail stock and then pushed it up to a jamb chuck he had made out of ply wood and MDF; this ensured that the body was centred. The reverse chuck was the removed and the base of the owl was cleaned up and made slightly concave. 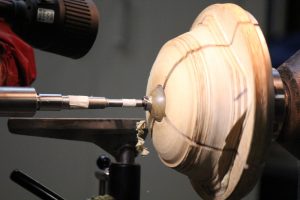 Making the owl:
To make the eyes John put the body on a flat surface in order to decide where he thought the eyes should go. He generally follows these measurements: eyes 33mm up from the base and 20mm apart from the centre of each eye.
The body was then put back into the jamb chuck and it was lined up using the tail stock. To make the hole for the eye John used a forstner bit after enlarging the hole with a centring bit. John then used tight bond PVA glue to secure the eye and it was the turned down flat against the body. This process was repeated for each eye. 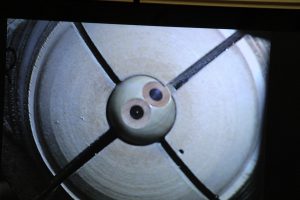 Thanks to John for the great demo! This owl it is a sweet looking creature made for the purpose of holding or for looking at on your desk. The above process was fairly involved but could be made simpler by using a few short cuts… such as using a sanding belt for the base. Overall, I wish John all the best on his mission to create an army of owls! 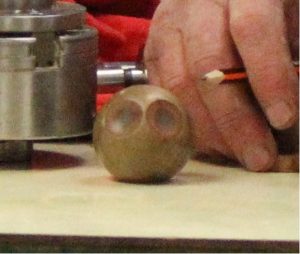