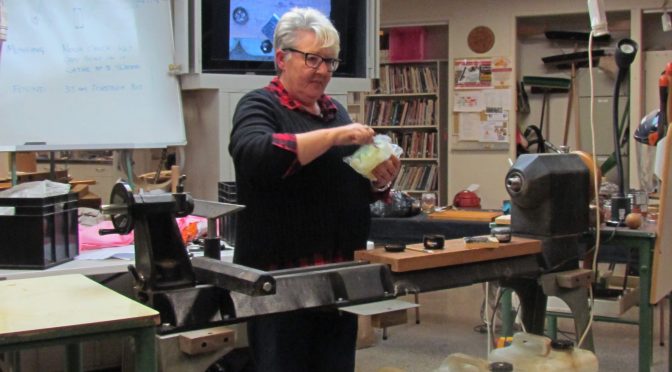 Tonight’s Demo by Janet is called “Barking up the wrong tree”, it could be renamed “Wrong bark up the tree”.

As bark does not always stay on the wood or it is in the wrong place or it does not look as desired, Janet came up with an interesting way of making her own bark. Some of her inspiration comes from painting effects on pottery (www.jackiemasters.com).

The process starts with applying hot melt glue, a few lines at a time. Then using a small fingernail file she a bark-like texture. Care needs to be taken as the glue will flatten out as it cools.

Janet recommends to apply a layer of Gesso as undercoat before painting using a stencil brush.

The first coat of paint has to cover all of the undercoat. A dark brown color paint was used.

The next coats are smudged on with a finger. Each coat has a lighter color than the previous and is applied so that it does not cover the entire previous coat. The last coat is applied by tapping with a paint brush.

The obtained effect looks very similar to real bark, but one does not have to be limited by natural bark colors. Janet showed some projects with pink, orange or blue paint, very far from natural bark…..

Thanks Janet for the entertaining demo and the inspiration to enhance our turning projects.